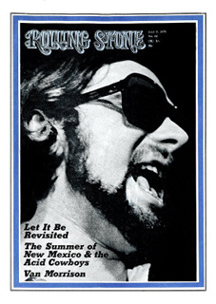 Normally when a father buys his 11-year-old son an acoustic guitar, it is little more than a gift that the son will lose interest in after learning how to strum his first few chords. For George Ivan Morrison, who would become known as “Van”, this guitar would probably be the greatest investment in his future his father could have ever made. Along with some neighborhood chums, Van started his first band “The Sputniks.” They started playing local gigs, and by 1958, Morrison had basically become the group’s front man. By the age of 14, Morrison started was performing at his school, with “Midnight Special.” After learning how to play the Saxophone, Morrison teamed up with Wesley Black, who was a keyboardist, and formed “The Monarchs.” After graduating from high school in 1960, Van, like other boys in his hometown of Belfast, Ireland, was expected to get a job. He tried his had at cleaning windows, but fortunately kept playing. He started to tour with the “International Monarchs,” as they were now known, throughout Europe. 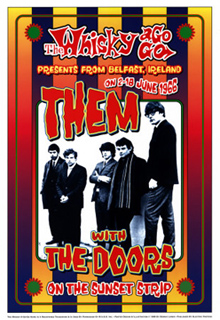 By 1963 the “…Monarchs” had gone their separate ways, and Van joined “The Golden Eagles,” who later become known as “Them.” With three charting singles, “Baby, Please Don’t Go,” “Here Comes the Night,” and “Mystic Eyes,” the group scored an extended playing engagement “across the pond,” as they say, at Hollywood’s famous Whisky a Go Go, in 1966. “Them” toured the western US, but after bad experiences, Morrison returned home to Ireland, wanting to get out of music all together. Luckily producer Bert Berns had started a record label, Bang Records, and asked Van to join him in New York. In 1967 Morrison recorded what would arguably be his most well known track, “Brown Eyed Girl,” which was included on his debut album, “Blowin’ Your Mind.” The song was quite successful and ended up at the #10 spot on the US charts. The album also included the song “Spanish Rose.” Shortly after, Berns passed away and Morrison moved to Boston, where he encountered some tough times. In 1968, after signing with Warner Bros., Morrison released the album “Astral Weeks.” The album would eventually be certified Gold, and paved the way for his next album “Moondance.” 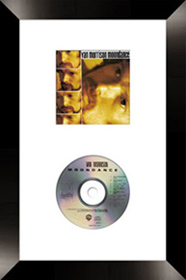 “Moondance” was released in 1970 and achieved far greater success than his previous albums. The songs “Come Running,” “Crazy Love,” and the title track, “Moondance,” helped the album eventually sell over 3 million copies. In November of the same year, Morrison released the record “His Band and the Street Choir.” Although it did not fair as well as “Moondance,” it’s single “Domino,” peaked at #9 on the US Pop singles charts. By 1972 Morrison was a seasoned performer, but as his popularity increased, so did the size of his audiences, which started to get to him, in the form of stage fright. He enjoyed performing his songs, but decided to take a break, easing himself back into things by playing for smaller crowds. In 1973 he began touring once again through the United States and Europe forming “The Caledonia Soul Orchestra,” which later became the scaled down, “Caledonia Soul Express.” After his 1974 album “Veedon Fleece,” Morrison once again took some time off.

In 1976 he returned to performing, somewhat reluctantly, playing his first show at a farewell concert for The Band. After being almost literally forced on stage, he played only a few songs, but regained some confidence with a warm reception from the crowd. The next year he released “A Period of Transition,” which included the song “The Eternal Kansas City,” and in 1978 released “Wavelength,” which did substantially better, eventually being certified Gold. Morrison had come along way from his roots in Belfast, definitely taking the road less traveled. His 1986 song “Cleaning Windows,” documented what could have been a career for the young Irishman. Giving back to his country, Morrison played at “Self Aid.” The concert benefited unemployment, which had become a widespread problem in Ireland. Morrison had become widely revered especially in Ireland, and in 1992 even received an honorary doctorate from the University of Ulster. 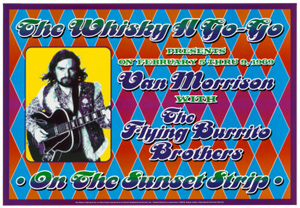 His fame and influence reached far beyond the borders of his own country, of course. In January of 1993, he was inducted into the Rock and Roll Hall of Fame, although he did not attend the ceremony. In 1996 he won a Grammy for Best Pop Collaboration with Vocals for the smash hit, “Have I Told You Lately.” Throughout the rest of the 1990’s and into the new millennium, Van Morrison has continued to earn recognition for his massive contributions to music and pop culture. “Brown Eyed Girl,” has been used in countless movies and is still one of the most popular songs of all time. In 2008 Morrison released “Keep It Simple.” The record would be his 33rd studio album, and was comprised of completely new material. As of 2009, Morrison continues to perform selling out shows and captivating new generations of music lovers. He is truly a living legend.