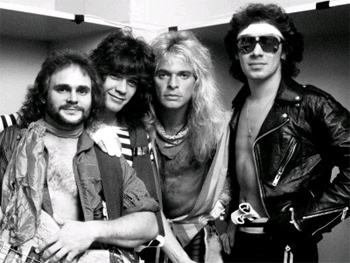 Brothers Eddie and Alex Van Halen originally started the band “Mammoth” while living in Pasadena, California in 1972. Eddie played lead guitar and sang, Alex played the drums, and Mark Stone was brought in to play bass. Once David Lee Roth joined shortly after the group’s formation, he took over the responsibilities of singing. In 1974 bassist Michael Anthony, who also sang back up vocals for the group, replaced Mark Stone. After realizing that the name “Mammoth” had already been claimed by another band, the boys decided to change the name to “Van Halen.” After playing club gigs in their hometown of Pasadena and in nearby Hollywood, the guys landed their first job at Gazzarri’s on West Hollywood’s very famous Sunset Strip. Eventually they played the street’s other famous venues such as the Whiskey a Go Go. After reportedly being flown to New York City by Kiss’s Gene Simmons, they recorded the now very famous single “Runnin’ With the Devil” at Electric Lady Studios. In 1974 they signed with Warner Brothers Records and released their first self-titled album, “Van Halen.” It ascended the charts quickly reaching a very respectable #19 thanks in part to the track “Runnin’ With the Devil.” 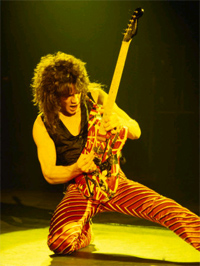 Their rapid success attributed to ego’s that were starting to cause problems between Eddie and David Lee Roth. However they continued recording and in 1979 released “Van Halen II.” The album produced their first top 20 single in the form of “Dance the Night Away.” The album did extremely well, eventually selling over 5 million copies in the United States alone. 1980 brought the release of “Women and Children First.” The album didn’t do quite as well as it’s predecessor, but still sold over 3 million units in the US. The album included songs like “Everybody Wants Some!!,” and “And the Cradle Will Rock.” It would be the first record not to feature any cover songs. The next year they released “Fair Warning,” which was followed by “Diver Down” in 1982, which ranked #3 on the charts and sold over 4 million copies in the US. In the year 1984 Van Halen released the appropriately titled “1984.” It brought them sales they hadn’t come close to reaching since their first album and included the songs, “Jump,” “Panama,” and the track “Hot for Teacher,” which produced one of the more memorable music videos of all time. The album reached the #2 spot on the charts and earned them a Grammy Nomination for the song “Jump,” which sold over 3 million copies as a single and became their first #1 hit. Despite their continued success, the infighting between David Lee Roth and Eddie Van Halen worsened, and on April 1st 1985, Roth left the band. 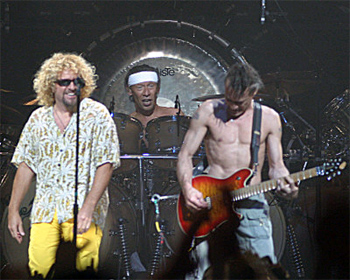 Sammy Hagar filled the singing vacancy left by Roth, and also contributed by playing rhythm guitar. The band began recording, and in 1986 released the album “5150.” Although it brought in less than half the sales of “1984,” it became the band’s first #1 album. With the hits “Dreams,” “Best of Both Worlds,” and “Why Can’t This Be Love,” it is easy to see why. The band launched their “1986 Tour,” and with Hagar in the driver’s seat, started to focus on their new material and previous hits, phasing out Roth’s contributions. Two years later the band released OU812 (Oh You Ate One Too) reportedly a joke directed at David Lee Roth’s solo album entitled “Eat ‘Em and Smile.” The album did well selling over 4 million copies and reaching the #1 spot on the charts.

Van Halen’s first album of the new decade, 1991’s border line obscenely titled “For Unlawful Carnal Knowledge,” once again proved successful. The singles “Runaround,” “Man on a Mission,” and the extremely popular “Right Now” landed the album on top of the charts for the third consecutive time. Selling over 3 million copies in the US, the record earned them a Grammy Award for Best Hard Rock Performance with Vocals. “…Carnal Knowledge” was followed up by the 1993 release “Live: Right Here, Right Now,” and “Balance” in 1995 which would sell more than 3 million copies. Unfortunately, once again, “imbalances” of egos lead to conflict between the Van Halen brothers and Sammy Hagar. In June of 1996 Hagar and the Van Halens parted ways, leaving them searching for another singer. The drama of the break up wasn’t bad for everyone involved; it actually helped Sammy Hagar continue the solo career he had put on hold when he joined the band. 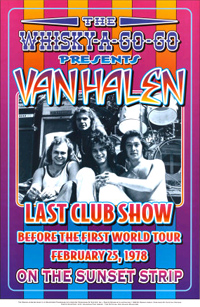 To try and fill Hagar’s shoes, the band chose a friend of Eddie Van Halen’s, singer Mitch Malloy. He was soon replaced by Gary Cherone and the band released “Van Halen III,” in 1998. For the first time Eddie Van Halen would also try his hand as lead singer. Although still making it to the #4 spot on the charts, “III” became their worst selling album, and their first not to be certified Platinum. In November of the next year, Cherone left the band. The next few years were a virtual dry spell for the band. In 2001 long time record company Warner Bros dropped them. David Lee Roth and Sammy Hagar actually went on tour together in 2002 and Hagar started his own line of tequila named “Cabo Wabo.” In 2004 Eddie Van Halen underwent treatment for cancer. It wasn’t until the summer of 2004 that fans got the new music they were hoping for. The double “Greatest Hits” album was released and included three new songs with Sammy Hagar, “Up for Breakfast,” “Learning to See,” and a track whose title probably summed up fans emotions, “It’s About Time.” The fans showed their approval and the album went Platinum in August of 2004. In 2006 Michael Anthony left the band, but on March 12th 2007, when the band was inducted into the Rock and Roll Hall of Fame, Anthony and Hagar were the only two “members” to show up, although they weren’t actually members of the band at the time. On September 2007 Van Halen started their “Reunion Tour.” The band now included David Lee Roth, Eddie Van Halen, Alex Van Halen, and Eddie’s son, Wolfgang on bass. Their tour, which made more than 92 million dollars, came to an end on June 2nd 2008. Not too shabby for less than a years work.