In 1978, Larry Mullen, attending Mount Temple High School in Dublin, Ireland posted a notice on a bulletin board looking for band mates. Singer Paul “Bono” David Hewson, guitarist David “The Edge” Howell Evans and bassist Adam Clayton answered his ad, and as easy as that one of the biggest rock bands in the world, U2, was created, although they did try out the names “Feedback” and the “Hype” before settling on their current name. In September of 1979 the four Irishmen released their first EP entitled “U2-3,” which fittingly had 3 tracks, one of them being “ Out of Control.” The record was released through a CBS label, but only in Ireland. That would soon change. As hype about the band spread via word of mouth, their popularity increased, and in 1980, they were signed to Island Records and released their first album, “Boy,” which included the song “I Will Follow.”

1983 brought U2’s second effort, which would turn out to be quite the follow up. Their second album, “War,” whose title alluded to the on going bloody conflict in their home country, included what would end up being two of their smash hits, “New Years Day” and “Sunday Bloody Sunday.” “Sunday Bloody Sunday” sat at a respectable 12th spot on the charts In the US and came in at #1 in the UK. “Sunday Bloody Sunday” also became the groups’ first #1 song. This was impressive, especially for a second record. In 1984 “The Unforgettable Fire” was released which included the constantly played track “Pride (In the Name of Love). With two hugely successful albums under their belts the group performed in July of 1985 at Live Aid. 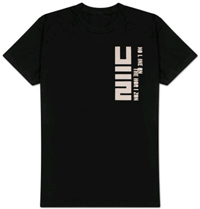 Unlike a lot of other bands, U2 wasn’t just having beginners luck. March of 1987 brought the release of “The Joshua Tree,” which Rolling Stone Magazine proclaimed to be the 3rd best album of the 1980’s. If you consider their competition, this is quite the compliment, and certainly deserved. The album produced the # 1 hits “With or Without You” and “I Still Haven’t Found What I’m Looking For.” The album sold more than 15 million copies world wide and stood triumphantly at the top of the charts for 9 weeks. Riding the wave of success that Joshua Tree created the band released “Rattle and Hum” which was a double album that consisted of both live and studio recorded material as well as a concert film. It was a very wise choice. The album climbed to the #1 spot where it stayed for 6 weeks. The album included the hits “Desire” and Angel of Harlem.” 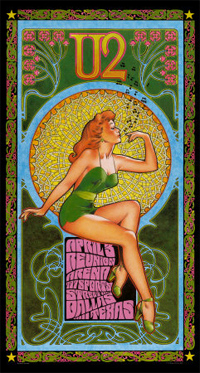 Wanting to give their fans something different than what was offered with Joshua Tree, U2 released “Achtung Baby.” It was supposed to be a complete 180 from “…Tree” musically, but as far as record sales go it followed in its footsteps quite well. Recorded in Berlin, the album sold over 10 million copies worldwide. Continuing with the idea of giving fans something different, the group released Zoorora in 1993 and Pop in 1997. Pop was quite a change from what connoisseurs of U2 had come to expect. This album was meant to be more along the lines of electronica and dance music. The tour that accompanied the album was absolutely massive. With 200 crew members and 1200 tons of equipment, it was said to be the “Sgt Pepper of tours.” 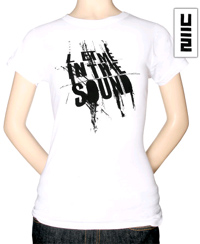 The year 2000 may have brought about the new millennium, but one thing that wasn’t new was U2’s continued dominance in the music industry. In 2001 they released “All That You Can’t Leave Behind.” U2 certainly couldn’t leave behind what was now a tradition of hugely popular music. The album became #1 in 32 countries around the world and won the now “super group” 7 Grammy awards which included song of the year for the track “ Beautiful Day.” In 2004 they released “How to Dismantle an Atomic Bomb.” This album included the popular song “Vertigo.” Their follow up album was “No Line on the Horizon,” which was released on February 27th 2009. The band plans to support the album with the U2 360 (degree) tour. U2 has had almost unparalleled success in this new age of Internet downloads and uncertainty in regards to the future of the recording industry. It is hard to compare their success with any other band within the last 20 years, and on top of all that, have been very socially conscious. As impressive as their record sales figures are, even more so are their contributions to those less fortunate than themselves and humanity in general.