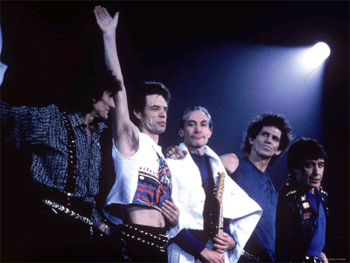 The Rolling Stones, whose name was inspired by a Muddy Waters’ song, have been a staple of rock music since 1962. Singer Mick Jagger and guitarist Keith Richards were childhood friends, and began their musical venture when Richards joined Jagger’s band Little Boy Blue and the Blue Boys. After touring local London clubs Jagger and Richards met guitarist Brian Jones. The three became roommates and after Jones mentioned he was forming a band, Jagger and Richards eagerly joined. On July 12th 1962, with the addition of bassist Dick Taylor, drummer Mick Avory and keyboardist Ian Stewart , who later became their lifelong road manager, The Rolling Stones were born. After playing at the Crawdaddy Club for 8 months and replacing Dick Taylor and Mick Avory with bassist Bill Wyman and drummer Charlie Watts, the group’s lineup was locked in. 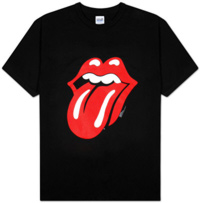 Andrew Loog Oldham became their producer/manager and decided the group would do the opposite of what The Beatles were doing. He wanted the band to be darker and sexier, which wasn’t hard considering at the time The Beatles focused more on the lighter side of life. In 1963 the Stones released their first album featured their second single “I Wanna Be Your Man” which was written by John Lennon and Paul McCartney. This proved that even if the Rolling Stones were the opposite of The Beatles, they were not rivals. In 1964 the Stones appeared on The Ed Sullivan Show, which kicked off their second US tour. Although Sullivan swore he would never have them back, they performed 6 times between 1964 and 1969. 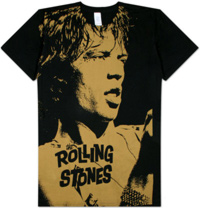 In 1965 they released the single (I Can’t Get No) Satisfaction, which many consider to be the greatest rock song of all time. This paved the way for their 1966 album “Aftermath”, which was their first album to consist of all Jagger/Richards original songs including “Under My Thumb”. The Jagger/Richards relationship seemed to only be strengthen after their 1967 drug bust in which Jagger, Richards, and Brian Jones narrowly avoided jail. Unfortunately, Brian Jones ended up leaving the band in 1969 sighting “musical differences” and by July 3rd of that year was found dead in his swimming pool. His official cause of death was stated as “ death by misadventure.” Jones was replaced by Mick Taylor, who played with the Stones at their legendary July 5th 1969 free concert in London’s Hyde Park. 250,000 people reportedly attended the concert.

The Stones’ last album of the 1960’s was “Let it Bleed”, which featured the hits “Midnight Rambler” and “Gimme Shelter”. Just 3 days after Woodstock the Stones held another free concert at Altamont Speedway outside San Fransisco. Unfortunately this free concert did not go as smoothly as their previous free show in London. On December 6th Meredith Hunter, who had reportedly said he was going to kill Jagger, was stabbed to death by a member of the Hell’s Angels motorcycle gang. The whole incident was caught on tape and can be seen in the Stones documentary “Gimme Shelter”, which is probably a more sensitive title choice than “Let it Bleed”. 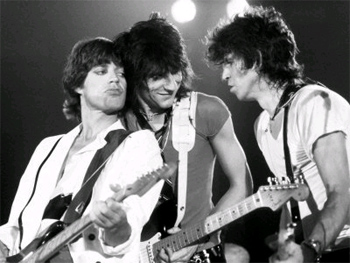 1970 ushered in the disco era, however the Stones were still going strong, starting their own record label and releasing the album “Sticky Fingers” which included the mega-hit single “Brown Sugar”, and continued the band’s dirty and sexy image. In 1974 Mick Taylor parted ways with the band and was replaced by guitarist Ron Wood, who was an official member by the release of their album Black and Blue in 1976. The 80’s once again proved to be a successful decade for the group. In 1981 they released “Tattoo You” which was their best selling album. “Tattoo You” was number 1 on the charts for 9 weeks. They were also inducted to the prestigious Rock and Roll Hall of Fame in 1989. The 1990’s and 2000’s have brought the Stones continued success: a Grammy for Best Rock Album for the album “Voodoo Lounge” and numerous lengthy tours. In 1992 bassist Bill Wyman decided to retire from the band on a high note. Fortunately for fans around the world, The Rolling Stones are still at it, headlining such events as the Super Bowl in 2006, which seems quite appropriate: It doesn’t get any bigger than the Super Bowl, and they don’t come much better than The Rolling Stones.