After his band Curved Air broke up in 1976, American drummer Stewart Copeland was itching to start a new band. In January of 1977 he started rehearsing with singer and bassist Gordon Sumner, who would later be known as “Sting”, and guitarist Henri Padovani. Copeland’s brother Miles became the group’s manager and after the trio recorded their first single “Fall Out/Nothing Achieving” in February of 1977, released it on IRS Records. IRS or Illegal Records Syndicate was an independent record label Stewart and Miles had formed. Their first single was a success selling close to 70,000 copies in the United Kingdom, so “The Police” as they were now known, started touring. 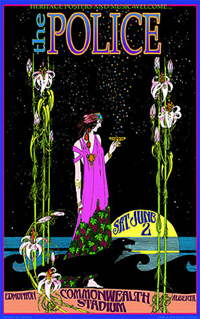 Shortly after starting their tour guitarist Andy Summers joined the band. He had played in a handful of different groups including “Eric Burden and The Animals.” He eventually replaced Padovani and took over the guitar duties exclusively. In October 1978 the band played at the very famous CBGB’s in New York City, making their American debut. The next moth they released their first album entitled “Outlandos d’Amour,” which loosely translated to “Commandos of Love,” quite the intriguing title. The album included the now very famous song “Roxanne” which was about a prostitute, reportedly inspired by a visit that Sting had taken to the red-light district in Paris. The track hit #32 on the US charts, and soon after they were signed to A&M records. The band started touring the United States in true grassroots fashion, driving themselves from gig to gig carting around their own equipment. 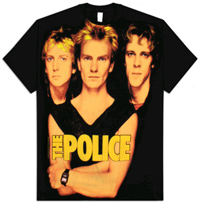 In October 1979 the band released their second record “Reggatta de Blanc.” The album was nothing less than a huge success. It stayed on top of the British charts for 4 weeks and included the hits “Message in a Bottle” and “Walking on the Moon.” The album’s title track “Reggatta de Blanc,” went on to win a Grammy award for Best Rock Instrumental Performance. In March of 1980 The Police embarked on a world tour. They traveled to many different countries, some of which were not frequented by major western musicians. They performed in Egypt and India increasing their fan base with every stop. In the fall of 1980 the album “Zenyatta Mondatta” was released. It was also a major triumph and included the songs “De Do Do Do, De Da Da Da,” and “Don’t Stand So Close to Me.” Once again the band raked in the Grammy awards, winning for Best Rock Instrumental Performance for the track “Behind my Camel,” and Best Rock Vocal Performance By A Duo or Group for the song “Don’t Stand So Close to Me.” Unfortunately their success also contributed to problems between the band’s members. 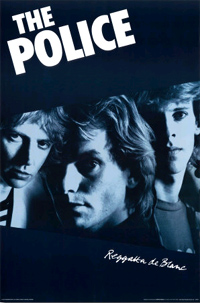 Sting started an acting career and made his silver screen debut in the film version of The Who’s rock opera “Quadrophenia.” Although Copeland and Sting’s relationship started to go south, the trio forged ahead and released their fourth album “Ghost in the Machine” in 1981. The band’s hit making abilities were again proven with songs like “ Invisible Sun,” “Every Little Thing She Does is Magic,” and “Spirits in the Material World.” However the next year, in 1982, they decided to take a short break. Sting continued pursuing his acting career and in 1983 they reemerged and released “Synchronicity.” The album included the songs “Wrapped Around Your Finger,” “Synchronicity II,” “King of Pain,” and “Every Breathe You Take.” The record eventually became #1 in England and debuted at #1 in the United States, where it would hold it’s position for an impressive 17 weeks. Once again they were awarded Grammies. “Every Breathe You Take” beat out Michael Jackson’s super hit “Billie Jean” for Song Of The Year. It also won for Best Pop Performance By A Duo Or Group, and “Synchronicity II” received the award for Best Rock Performance By A Duo or Group. After the tour that supported the album ended in March 1984, the band went their separate ways only to reunite briefly for performances for the Amnesty International “A Conspiracy of Hope Tour.”

On March 10th, 2003 The Police were inducted into the Rock and Roll Hall of Fame. Four years later the group opened the televised 49th Annual Grammy Awards, where they performed what is probably their most famous hit “Roxanne,” as well as others. The band then performed around the world on their “Reunion Tour.” In Dublin, Ireland they played for more than 81,000 screaming fans that were still eager to here their now classic repertoire. They played all around the world and were joined in Paris by original member Henry Padovani. All the members are currently alive and well, and although they are not performing at the moment, will hopefully grant fan’s wishes and return to the stage.