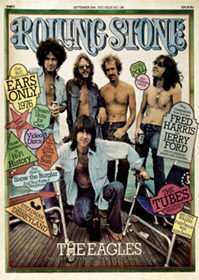 In the early 1970 in Los Angeles, California singer Linda Ronstadt was in need of a back up band, so Glenn Frey, Berie Leadon and Randy Meisner were recruited. Since the back up band was still in need of a drummer, Frey brought in Don Henley. After playing on Ronstadt’s self- titled album and performing with her on tour, the guys decided to continue and called themselves Eagles (even though they are commonly referred to as “The” Eagles, the band’s official name is simply Eagles.) The band was signed to Asylum Records and released their self- titled debut album “Eagles,” on June 17th, 1972. The album ascended the charts to the #22 spot and included the now classic singles “Take It Easy,” “Witchy Woman,” and “Peaceful Easy Feeling.” 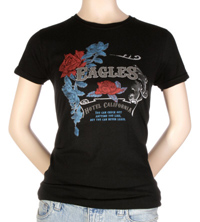 Less than a year later came the album “Desperado.” This record was the start of the Henley/Frey writing partnership that would truly define the band. The album didn’t place as high on the charts as it predecessor, reaching the #41 spot, but produced the hit songs“Tequila Sunrise,” and the album’s title track “Desperado.” The record would go on to sell more than 2 million copies in the US alone, a figure that would later be dwarfed by future album sales. By this point Henley and Frey had understandably become the focal point of the band, which would later lead to tensions among the band’s members. Don Felder joined the group after contributing guitar work on the song “Good Day in Hell,” which was included on the Eagles’ next album, 1974’s “On the Border.” The album ranked higher on the charts than any of their previous attempts, taking the #17 spot. The single “Best of My Love,” would score the band its first #1 hit and help the record sell more than 2 million units in the United States. 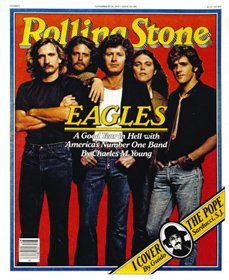 “One of These Nights” was released on June 10th, 1975 and became the band’s first #1 album. The hit single “Lyin’ Eyes,” earned the band the Grammy for Best Pop Performance by a Duo or Group with Vocal. The record also included the song “One of These Nights,” which took the top spot on the charts in 1975. Tensions between the group’s members were starting to show however, and in December of 1975 Bernie Leadon left the band. Since the group was on tour, Joe Walsh swiftly replaced Leadon and the Eagles continued on. “Their Greatest Hits (1971-1975),” was released on February 17th, 1976, and became a #1 album. The compilation would eventually sell a staggering 49 million copies worldwide.

Unquestionably the band’s most popular album, the epic “Hotel California,” was released on December 8th, 1976. The record produced the mega hit singles “New Kid in Town,” “Life in the Fast Lane,” and what would become the band’s most well known song “Hotel California.” The Eagles toured in support of the album, and upon its completion, Randy Meisner quit the band. Meisner was replaced by Timothy B. Schmit and the Eagles spent the next 2 years in the studio working on what would be their last studio album for more than 2 decades. “The Long Run,” debuted at #2 on the charts on September 24th, 1979, quickly taking over the #1 spot. The single “Heartache Tonight” won the group another Grammy award for Best Rock Performance By a Duo or Group in 1979. Despite their continued success, and most likely because of it, the band split up in 1980. Due to contractual obligations “Eagles Live” was released on November 7th, 1980 and sold more than 7 million copies in the US. 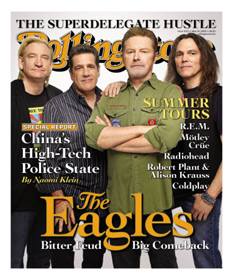 In 1994, fans’ prayers were finally answered when the Eagles, which included Frey, Henley, Walsh, Felder, Schmit and a few other musicians, returned to the road. The tour produced the “Hell Freezes Over” live album, which debuted at #1 and included a new song entitled “Love Will Keep Us Alive.” In 1998 the band took its rightful place among the greats when it was inducted into the Rock and Roll Hall of Fame. The next year the band performed on New Year’s Eve in Los Angeles. This would be the last time Don Felder would join the band. Felder was fired on February 6th, 2001 and replaced by Steuart Smith when the group went on tour. Felder sued the band, and was later countersued by Henley and Frey. Fortunately the band moved forward and “The Very Best of the Eagles” was released in 2003. It sold more than 5 million copies. On October 30th, 2007 the Eagles released their first album consisting of all new material since 1979. “Long Road Out of Eden,” in true Eagles fashion, debuted at #1 and sold more than 7 million copies in the US. The single “How Long” also earned the band a Grammy for Best Country Performance by a Duo or Group with Vocal in 2008. The band supported the album with a tour that concluded in the summer of 2009.