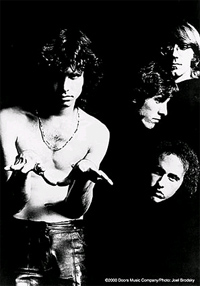 Jim Morrison and keyboardist Ray Manzarek met at UCLA, in Southern California, while attending the university’s famous film program. Fortunately for the world of rock, the “silver screen” was not what made these two men famous. Manzarek, and his two brothers had started a band, “Rick and the Ravensask,” but were in need of a singer and bassist. One night on Venice Beach after Morrison had read a poem/song that he had written called “Moonlight Drive,” Manzarek invited Morrison to join his band. Shortly after, drummer Jon Densmore also joined the group, and Manzarek’s brothers quit the band. Due to the fact that Manzarek’s brothers had played guitar and bass, guitarist Robby Krieger, a friend of Densmore’s, came on board to fill the spot. The four decided not to recruit a bassist and came to the conclusion that Manzarek could take care of the bass parts while playing the organ. Now virtually a new band, Morrison decided to change the group’s name. “The Doors” was chosen, which was a reference to Aldous Huxley’s book about mescaline, “The Doors of Perception,” which itself was a reference to a line from a poem by William Blake. 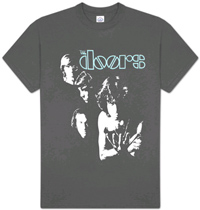 Playing at London Fog and then the Whiskey a Go Go on Hollywood’s Sunset Strip helped get The Doors their start. They were fired from the Whiskey after playing a song that was deemed too “out there” called, ironically enough, “The End.” Fortunately this “End” was a new beginning, creating buzz around the band that lead to a record deal in 1966 with Elektra Records. Their debut album in 1967 was the self-titled “The Doors.” This record included the songs “The End” and “Light My Fire.” On July 1967 “Light My Fire” became the number one selling single in the U.S. Initially over 7 minutes long, it was cut down so that it could get more airtime on radio stations. On September 17, 1967 the group performed “Light My Fire” on the “Ed Sullivan Show,” and although it had been agreed upon beforehand that he wouldn’t, Morrison defiantly sang the now very famous line “Girl we couldn’t get much higher.”

The album “Strange Days”, which made the song “People Are Strange” famous, was also released in 1967. This record was followed by “Waiting for the Sun,” released in 1968. It included “The Unknown Soldier” and the number one hit “Hello, I Love You.” A poem, “The Celebration of the Lizard King” printed on the record jacket, introduced Morrison’s alter ego, “The Lizard King.” This alter ego seemed to be taking control of Morrison’s life in the form of excessive drug and alcohol abuse, resulting in off-the-wall behavior which made its way into the band’s performances. Morrison was arrested in New Haven for “public obscenity,” in August 1968 for disorderly conduct on a flight to Phoenix, and again in Hartford, Connecticut for assaulting a police officer. Unfortunately for his band mates, in March 1969 he was also arrested after exposing himself onstage at the “Dinner Key” in Miami. Although charges were ultimately dropped, this kept Morrison tied up with legal troubles for most of the year. Despite this fact the band released the record “Morrison Hotel” the next year. 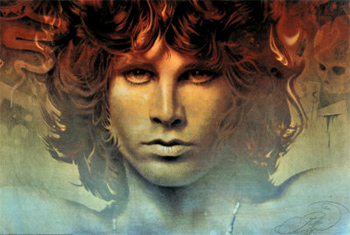 In 1971 The Doors seemed to make a comeback with the album “L.A. Woman” which included the hits “Lover Her Madly,” “Riders on the Storm,” and “L.A. Woman.” Unfortunately, due to his continued drug and alcohol abuse, Morrison took a leave of absence from the band and moved to Paris, France where he had reportedly wished to start a literary career. Tragically, he was found dead in his bathtub on July 3, 1971 due to a heart attack. After Morrison’s death, the remaining members, Manzarek, Krieger and Densmore decided not to replace him. Manzarek took over vocals and The Doors continued as a trio, but in 1973 went their separate ways. 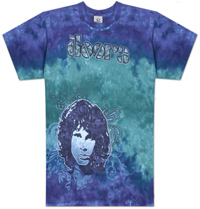 Jim Morrison was truly the epitome of the label “Rock Star,” and that has greatly contributed to The Door’s success. In 1980, after a documentary about Morrison, sales of The Doors albums exceeded all previous sales combined in just one year. In the United States alone they have sold more than 32 million albums, and their popularity continues to this very day. As of 2009, Robby Krieger and Ray Manzarek went back on tour as “Ray Manzarek and Robby Krieger of The Doors.” Manzarek and Krieger are joined by vocalist Brett Scallions, bassist Phil Chen and drummer Ty Dennis.