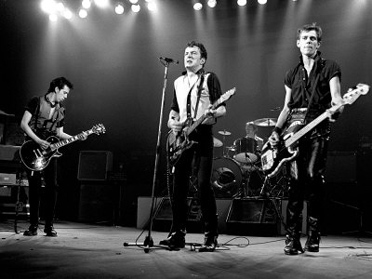 The Clash helped solidify the mental images that are most commonly associated with punk rock: youth, anger and energy. It seems almost cliché that founding members Joe Strummer and Mick Jones, who both became the group’s guitarist/singers, met while waiting in an unemployment line. Nevertheless, Strummer would leave the band he was currently involved with, the “101ers,” shortly after to join the newly forming Clash. “The Clash” would now consist of singer/guitarist Joe Strummer, singer/guitarist Mick Jones, guitarist Keith Levene, bassist Paul Simonon, and drummer Tory Crimes. The band would get their name after a suggestion from Simonon who noticed how many times the word clash appeared in the newspaper he was reading. Appropriately enough the band played their first gig on July 4th, 1976, when they opened for “The Sex Pistols,” who were arguably the Godfathers of Punk Rock. 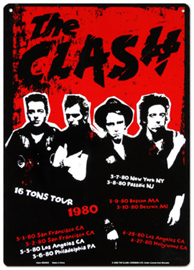 The next year the band, now a foursome after guitarist Keith Levene leaves, signs a recording contract with CBS records, and are reportedly given a $200,000 advance. On March 18th, 1977 they release their first single “White Riot/1977,” which hits #38 on the British charts. This primed their fans for their debut album, which is self titled, and includes the songs “I’m So Bored With the USA,” “London’s Burning,” and “White Riot.” The record places #12 on the British charts, and despite not actually being released in the US until later, sells 100,000 copies. Soon after the band, along with newly enlisted drummer Topper Headon, embarks on their first headlining tour of the UK, “The White Riot Tour.” During one stop, fans rip seats from the floor. With their first tour, not to mention police encounters, behind them, the band returns to the studio to record their second album.

On November 10th, 1978 The Clash release their second album, “Give ‘Em Enough Rope.” The songs “Stay Free,” “Safe European Home,” and “Tommy Gun” are included. The record eventually achieves Gold certification in the UK. The next year the band sets off on their first US tour, and in May of 1979 they release “The Cost of Living,” which includes the band’s now famous remake of the Bobby Fuller Four song “I Fought the Law,” which, in the same spirit, will later be covered by punk predecessors “Green Day.” Two months later the band’s first self-titled album is finally released in the United States, and is shortly followed by the December release of the album “London Calling.” The cornerstone track of the album, which is also named “London Calling,” makes it all the way to #11 on the UK charts. It is later released in the United States in January of 1980. Some American journalists declare it “one of the best albums of the 1980’s,” although it only makes it to #27 on the charts. The track “Train in Vain” will go on to be their first American hit. 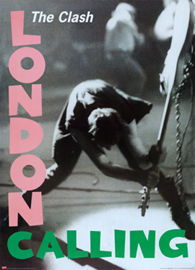 1981 brought the release of the groups’ triple LP, “Sandinista!” The album was released 2 months later in the US, in April, and ranked #24 on the charts. The album included the songs “Police on My Back,” Washington Bullets,” and “The Magnificent Seven.” This furthered the band’s repertoire and lead to the band playing 15 shows in 17 days. In May of 1982 the bands’ drummer, Topper Headon, parts ways citing “a difference in political direction,” and four days later the group releases the album “Combat Rock.” It includes the smash hits, “Should I Stay or Should I Go,” and the infectious “Rock the Casbah,” a musical protest to the Iranian governments’ banning of rock music. It was also reportedly “the first song played on the Armed Forces Radio during Operation Desert Shield.” “Combat Rock” would eventually go on to sell over 2 million records earning it a double Platinum certification. The record would also be the group’s final studio album. 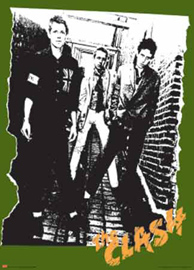 The next year The Clash would perform in California. This would be the last time they would do so with Mick Jones who would, shortly after, leave the band. Two years later, in November of 1985, “Cut the Crap” is released. The record would feature tracks such as “Dictator,” “Dirty Punk,” and “We Are The Clash.” Due to the fact that the band only consisted of Joe Strummer and Paul Simonon, The Clash break up shortly after. Almost six years later “Should I Stay or Should I Go,” is re-released as a single in the UK. Ironically it will become their first #1 single. Although live albums and documentaries are released in the interim, it isn’t until November 15th 2002 that Joe Strummer and Mick Jones take the stage together once again. Unfortunately, this will also be the last time. A little more than a month later at his home in Somerset, England on December 22nd, Strummer passes away due to heart failure. Strummer left behind a legacy that laid the groundwork for countless other successful punk bands who mimicked the style, sound and look of the now legendary band. Many modern rock bands owe a great deal to The Clash, and as fans of rock music, so do we. As of February 10th 2009, Mick Jones along with British pop sensation Lilly Allen, released a cover of the song “Straight to Hell.”