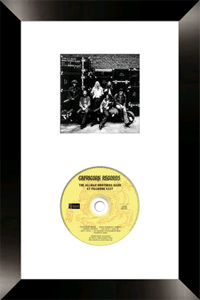 Click on the image to buy this Framed CD

Brothers Duane and Gregg Allman first started their musical partnership in 1963 when they formed their first band “The Escorts.” By 1965 the brothers had changed the name to “The Allman Joys and after changing names once again to “The Hour Glass” left their home state of Florida to set up shop in Los Angeles, California. The guys had released two albums as The Hour Glass, but when neither proved to be successful, they moved on to other things. The brothers started playing with guitarist Dickey Betts, bassist Berry Oakley and drummers Butch Trucks and Jai Johanny Johanson (known as “Jaimoe”) and on March 26th, 1969 “The Allman Brothers Band” was born. 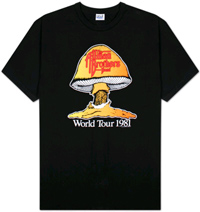 The next year the band released their live album “At Fillmore East” which was recorded during performances at the New York City club the Fillmore East. Tragically, on October 29th, 1971, founding member Duane Allman was involved in a motorcycle accident that ended his life. Despite the loss, the band forged ahead with Dickey Betts stepping up to cover for their fallen member. Less than a year later the band released the double album, “Eat A Peach.” Sadly it was the last album that Duane was able to contribute to. The album included both live and studio recordings. The song “Mountain Jam” is actually a 33-minute improv piece inspired by the Donovan song “ There is a Mountain.” Shortly after the album’s release, pianist Chuck Leavell joined the band in an attempt to fill in some of the sound that was lost with the death of Duane. Shockingly just 9 days after Leavell made his official debut, bassist Berry Oakley also died in a motorcycle accident. 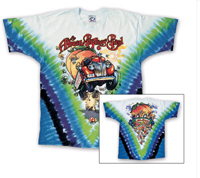 With the addition of Lamar Williams, who joined the band after Oakley’s death, The Allman Brothers Band released their epic album “Brothers and Sisters” in August of 1973. “Brothers and Sisters” shot to the top of the charts in the US with the help of the classic song “Ramblin’ Man.” “Ramblin’ Man” became the band’s highest charting single, reaching the #2 spot. The album also included the unforgettable instrumental track, “Jessica,” which is arguably one of the band’s most recognizable and popular songs. Despite their popularity, the band entered into a rough patch, dealing with financial problems and Gregg’s drug abuse. They were able to hold it together long enough to release “Win, Lose or Draw,” in August of 1975. The album made it to the #5 spot on the charts and notably produced the Muddy Waters cover “Can’t Lose What You Never Had,” as well as “High Falls,” and the title track “Win Lose or Draw.” By 1976 the band had succumb to inner tensions and after Gregg Allman was arrested on drug charges, they broke up. 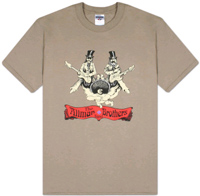 Reconvening in 1978 without members Leavell and Williams, who were replaced by guitarist Dan Toler and bassist David Goldflies, the band released “Enlightened Rogues “in 1979. The album included the songs “Crazy Love” and “Pegasus,” but didn’t do very well. The band broke up again in 1982, which resulted in numerous side projects. The band reunited in 1986 for a benefit concert, but didn’t officially come together again until 1989, although with a slightly different lineup that included Warren Haynes, Johnny Neel, Allen Woody and originals Gregg Allman, Dickey Betts, Jaimoe and Butch Trucks. Johnny Neel left the band after the release of the album “Seven Turns” the following year. Although the band’s lineup did change over the years, they continued to release albums, and in 1995 were inducted into the Rock and Roll Hall of Fame. In 1996 they won a Grammy for Best Rock Instrumental Performance for “Jessica.” During the 2000’s the band has continued to tour. Currently they are playing all around the United States, keeping their reputation as a jam band alive and well, while recruiting a new generation of fans along the way.