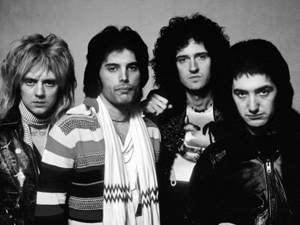 In 1967 Tim Staffell and Brian May wanted to form a band. They were looking for a drummer so May, being a resourceful student at London’s Imperial College, posted a want ad on a bulletin board. Roger Taylor, a dental student at the time, responded, and after auditioning joined Staffell and May in their new band appropriately named “Smile.” The group signed with Mercury Records in 1969, but soon after, Staffell exited the group and the remaining two members formed a new band called “Wreckage.” Singer Farrokh Bulsara had been a fan of “Smile” and a friend of Staffell’s from school. Bulsara was recruited as the band’s singer and would later become known as Freddie Mercury. Shortly after, the trio was joined by bassist John Deacon and the group, now called “Queen,” began its musical journey. As singer Freddie Mercury said, “I thought up the name Queen. It’s just a name, but it’s very regal obviously, and it sounds splendid. It’s a strong name, very universal and immediate. It had a lot of visual potential and was open to all sorts of interpretations. I was certainly aware of gay connotations, but that was just one facet of it.” On June 6th 1971 the band made its first appearance at the Hornsey Town Hall in London. Since the four men were still attending college, they decided not to perform the usual low brow gigs that most of their contemporaries were forced to play. Instead, they spent the next 2 years practicing and honing in their craft. They went on tour in 1973, and on July 6th of the same year, released their self-titled debut album. 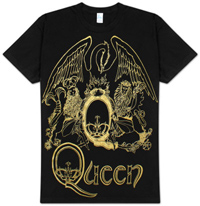 The band released their second album, simply named, “Queen II” in 1974. The album went to the #5 spot on the British charts, and they embarked on a tour opening for Mott the Hopple. It was on this tour that they would make their US debut. Later that year Queen released “Sheer Heart Attack.” The album included the song “Killer Queen” which would become their first top 20 hit in the US. “Sheer Heart Attack” also became the band’s first gold record in the US. Their slow steady success paid off in 1975 with the release of “A Night at the Opera.” The track “Bohemian Rhapsody” would shoot all the way to #2 in the US and in 1976 and would top the charts in the UK for 9 straight weeks. On June 12th of the same year, the now classic song from the same album, “You’re My Best Friend,” hit #16 on the charts. The album went on to sell more than 3.6 million copies.

“We Are the Champions” became a hit in February of 1978. The song would go on to be a staple in the world of sports, being played absolutely everywhere. Despite their monumental success thus far, Queen still had not made it to the top of the charts in the United States. On June 30th 1980 they released “The Game” and that all changed. With hit singles, “Need Your Loving Tonight,” “Play the Game,” “Save Me,” and the infectiously catchy “Crazy Little Thing Called Love,” Queen could add another jewel to their crown in the form of a #1 album in the US. In America alone the album sold more than 4.4 million copies. “Another One Bites the Dust,” also became a #1 hit. Queen was now truly an international sensation. In 1981 the band would also team up with superstar David Bowie to record “Under Pressure.” Although it is a beloved song and certainly one of their classics, it didn’t do as well commercially as the band had expected. 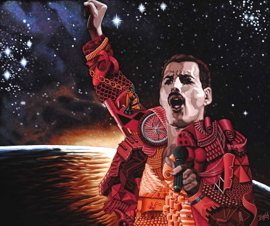 The album “The Works” was released on February 27th 1984. It included the hit single “Radio Ga-Ga,” and was followed by the record “A Kind of Magic” on June 2nd, 1986. A little more than 2 months later the band would play at Knebworth Stadium in England. Unbeknownst to fans, the performance, which would be the group’s 658th, would also be their last. “The Miracle” was released May 22nd 1989 and although it failed to produce the hits of previous albums, it didn’t really matter. Singer Freddie Mercury had secretly been battling AIDS. Although it had been rumored, the band had always denied it. In November of 1991 it was confirmed by Mercury himself. Just two days later, he was dead. 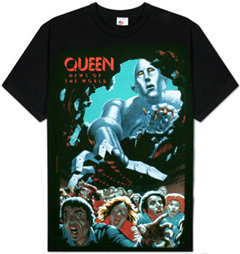 The next year on April 20th 1992 “A Concert for Life” was held at London’s Wembley Stadium. Many bands including Metallica and Elton John played, with all the concerts earnings going to AIDS charities. Ironically that same year Queen became incredibly popular in the United States again, due to the fact that the song “Bohemian Rhapsody,” was prominently featured in the motion picture “Wayne’s World.” The song actually remained in the #2 spot on the American charts for 5 weeks. Although the band did release a few more albums, it was obviously never the same. On March 19th 2001 Queen was inducted into the Rock and Roll Hall of Fame to take their rightfully deserved spot amongst music’s other legendary acts. Recently, as of October 8th 2008 Queen plus Paul Rodgers released the album “The Cosmos Rocks.” The new incarnation of the group included Brian May, Roger Taylor and singer Paul Rodgers.