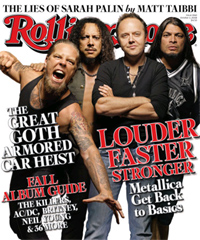 Drummer Lars Ulrich placed an ad seeking band mates in a local Los Angeles newspaper, in 1981. After singer/guitarist James Hetfield responded and the two clicked, Ulrich placed yet an other ad, which was answered by lead guitarist Dave Mustaine. Choosing the name Metallica, the band recorded what would be their first song for the compilation album, “Metal Massacre I.” The newly formed group made their debut on March 14th 1982, at Radio City in Anaheim, California with bassist Ron McGovney. The guys recorded what would be their first demo “Power Metal,” later that year, and after recruiting bassist Cliff Burton, Metallica was singed to Megaforce Records. Kirk Hammet soon replaced Dave Mustaine in 1983, and the band set forth to record their first record. 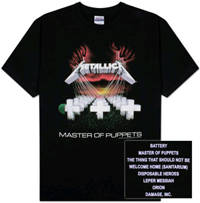 Metallica released “Kill ‘Em All,” on July 29th, 1983. The album didn’t sell particularly well at first, but placed a respectable #120 on the Billboard 200 charts. The record included the singles “Whiplash,” and “Jump in the Fire,” and the band went on tour to promote it. “Kill ‘Em All,” went on to sell over 3 million copies in the United States alone. Almost exactly a year later the band put out their second album entitled “Ride the Lightning,” which claimed the #100 spot on the charts. The record produced the songs “Creeping Death,” “For Whom The Bell Tolls,” and “Fade To Black.“ With sales figures that would later topped 5 million units domestically, fans were obviously starting to take notice, as was Elektra Records, which soon signed the band. Metallica embarked on their first European tour and upon their returned to the US, supported bands including W.A.S.P and Bon Jovi, attracting huge audiences.

The album “Master of Puppets,” was released March 3rd 1986, and received rave reviews. Metallica was gaining steam quickly and soon went on tour with the self proclaimed “Prince of Darkness” himself, Ozzy Osbourne, throughout the US. Unfortunately fame and fortune does not prevent tragedy. While touring Europe, on September 27, 1986, the bus that the band was riding in crashed and rolled multiple times. Although Ulrich, Hetfield, and Hammet were not seriously injured, bassist Cliff Burton was killed. Greatly saddened by the loss of their friend, Metallica continued on, eventually choosing Jason Newsted as Burton’s replacement. The band bounced back with the album “…And Justice for All,” on August 25th, 1988. The album became their first to break into the Top 10 spot and even earned them a Grammy nomination. The single “One,” was made into a music video, which was played on MTV, helping the band expand their ever-ballooning fan base. 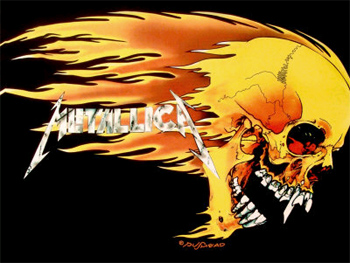 On August 12th, 1991 released their self-titled album, “Metallica.” With “Metallica,” the band achieved yet an other tremendous milestone; a #1 album. The record was an absolute phenomenon, producing some of the band’s most well know songs such as “Sad But True,” “Wherever I May Roam,” “The Unforgiven,” and what would become a staple of both the radio and MTV, and probably Metallica’s most famous song, “Enter Sandman.” “Metallica” sold more than 15 million copies in the United States alone and was promoted with a 14-month tour. Unfortunately, while touring on August 8th 1992, Hetfield was burned after contact with a pyrotechnic device on stage. Hetfield was able to continue with his vocal duties, but due to his injuries, John Marshall, who had filled in on numerous other occasions, covered his guitar parts. The group continued performing, notably at Woodstock ’94, and took a break before releasing their next album. The band returned with a cleaner look and released “Load,” on June 4th, 1996. Once again fans were thrilled. The record went to #1 and with the help of songs such as “Mama Said,” “King Nothing,” and “Hero of the Day,” was certified Platinum 5x’s. “ReLoad,” was released the next year and sold nearly as well, also claiming the #1 spot on the charts. 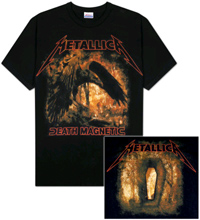 In 2000 the band’s contribution to the Mission Impossible II soundtrack, “I Disappear,” was leaked via the Internet file sharing service Napster. After realizing that all of their music was available for download the band sued. Napster eventually went bankrupt in 2002, but the lawsuit did little to stop Internet file sharing, nor did it appear to have any substantial affect on Metallica’s popularity long-term. Despite their massive success, and probably somewhat because of it, Jason Newsted parted ways with the band in January of 2001, citing “private and personal reasons.” The band continued, but on July 19th 2001 James Hetfield entered rehabilitation for addiction. Hetfield returned less than 6 months later and Robert Trujillo replaced Newsted on bass guitar. The band went back into the studio, which resulted in the 2003 release, “St. Anger.” The album debuted at #1 and the title track earned the band a Grammy for Best Metal Performance in 2004. More than 5 years after “St. Anger,” the band released “Death Magnetic.” The album was sold before its official release date and was subsequently leaked over the Internet but still managed to debut at #1. “Death Magnetic,” has since been certified Platinum and the band launched the “World Magnetic Tour,” in 2008 to promote it. Metallica was inducted into the Rock and Roll Hall of Fame on April 4th 2009 and are currently on tour.