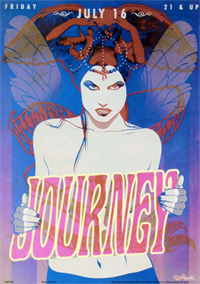 Formed in San Francisco, California in 1973, the Golden Gate Rhythm Section was started as a back up band. The group included Santana’s former lead guitarist Neal Schon and keyboardist/lead singer Gregg Rolie. Bassist Ross Valory, guitarist George Tickner and drummer Prairie Prince joined Schon and Rolie. The band soon changed its name to Journey, and performed for the first time on New Years Eve 1973. Aynsley Dunbar replaced Prairie Prince and after a performance at San Franciso’s Great American Music Hall the band signed with Columbia Records. They released their self-titled debut album “Journey,” in 1975, after which Tickner exited the band. 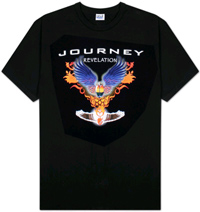 “Look into the Future,” was released in 1976, which was followed by “Next,” in 1977. Although each album did slightly better than its predecessor, Journey had yet to make its mark. With the encouragement of their record company the band changed their sound, hired Robert Fleischman to act as their front man and headed out on tour. Steve Perry soon replaced Fleischman and the band released their 4th album, “Infinity,” in 1978. “Infinity” did substantially better than their previous attempts, producing the songs “Lights,” and what would become one of their most recognizable hits, “Wheel in the Sky.” The album made it to the #21 spot on the charts and would eventually sell more than 3 million copies in the US alone, earning the band their first Platinum record. 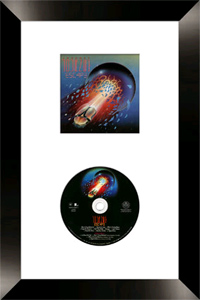 Steve Smith took over the drumming duties in 1978 and the band released “Evolution,” in 1979. The album included the song “Lovin’, Touchin’, Squeezin’,” which reached #16 on the charts and helped the album climb to the #20 spot and sell more than 3 million copies in the US. On March 23rd, 1980 the band released their 6th album “Departure,” which soared all the way to #8 on the charts. The record included the megahit “Anyway You Want It,” and once again sold more than 3 million units. Gregg Rolie soon parted ways with the group and was later replaced by Jonathan Cain.

On July 31st, 1981 the band released what would be their 7th studio album, “Escape.” With the help of the top 10 singles “Who’s Cryin’ Now,” “Open Arms,” and what is arguably the band’s most famous song, “Don’t Stop Believing,” “Escape” rightfully earned the #1 spot on the charts. Two years later the group released “Frontiers,” which included the songs “Separate Ways,” “Faithfully,” “After the Fall,” and “Send Her My Love.” The album made it to the #2 spot on the charts and sold more than 6 million copies in the United States. They supported the album with a tour and took a much-deserved break. 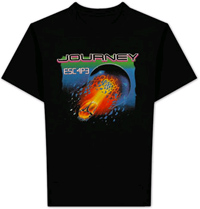 The band returned in 1986 with their release “Raised on Radio.” Soon afterwards Ross Valory and Steve Smith were fired from the band. Larrie Londin and Randy Jackson, who would later go on to judge the hugely popular “American Idol,” were brought in to pick up the slack. Unfortunately for fans, “Raised on Radio,” would be the band’s last studio album for more than 10 years. The band would return to hiatus in 1987 when Steve Perry left mid tour. On November 15th, 1988 Columbia released a “Greatest Hits,” album that would sell a staggering 15 million copies in the US alone. Steve Perry returned in 1991, and the band reconvened to release “Trial by Fire,” on October 22nd, 1996. The next year Perry was injured, and by 1998 had been replaced by Steve Augeri. Steve Smith, who had also left the band, was replaced by Deen Castronovo. Moving forward, the band released “Arrival” in 2001 and “Red 13” in 2002. In 2005 Journey was inducted into the Hollywood Walk of Fame. The same year they also celebrated their 30th anniversary with a tour, and released the album “Generations.” The next year, Augeri was replaced by singer Jeff Scott Soto. In December of 2007, in what has to be one of the most inspiring stories for anyone who has ever been in a cover band, Journey signed on signer Arnel Pineda. Pineda was recruited after the band had viewed videos on the Internet of him performing Journey songs with his cover band. Pineda made his live debut with the band in February 2008. The band released their latest album “Revelation,” in June of 2008. The record debuted at #5 and was certified Platinum. The band is currently touring and working on their next album.