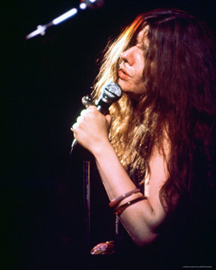 Janis Joplin was born and raised in the relatively small Texas City of Port Arthur. As a teenager she started listening to artists such as Leadbelly and Bessie Smith, who she would later say was her greatest influence. She began her musical ventures like many girls do, singing in a local choir. Janis didn’t really fit in and as countless others have experienced, got picked on at school. After graduating from Thomas Jefferson High in 1960 she attended Lamar State College of Technology and moved on to the University of Texas Austin, but never actually finished. It is said that her first recording was actually recorded on a friend’s recording device where she sang the song, “What Good Can Drinkin’ Do” in December of 1962. By the next year she had moved to San Francisco where she eventually settled, although temporarily, in the center of the hippie movement, Haight-Ashbury. 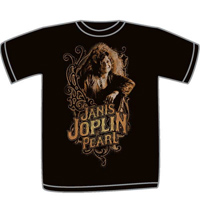 After meeting Jorma Kaukonen, who would later become the guitarist for the band Jefferson Airplane, Janis recorded various songs, which included “Trouble In Mind,” “Daddy, Daddy, Daddy,” and “Long Black Train.” By 1965 she had started doing drugs and after being visited by friends, was convinced to return home to Texas. She went home and cleaned up her act, enrolling at Lamar University. She started playing gigs in the nearby city of Austin, and after impressing Chet Helms who was a local promoter and at the time managing the group “Big Brother and the Holding Company, was asked to join the band. She accepted the invitation on June 4th, 1966 and shortly after made her debut at the Avalon Ballroom in San Francisco.

In August of 1966 “Big Brother…” singed a record deal with Mainstream Records after they had spent a month performing in Chicago. Despite this fact, they were nearly penniless and once they finally made their way back from Illinois to California, moved into a house Lagunitas with the Grateful Dead. Not surprisingly, considering the Dead’s reputation for heavy drug use, Janis fell into old habits. The band played the Fillmore West, Winterland, and Avalon Ballroom in San Francisco, and continued performing in cities ranging from Los Angeles to Vancouver, BC. In 1967 their self-titled debut album was released by Columbia Records. The band gained considerable popularity after performing at the Monterey Pop Festival, which included other acts such as The Who and Jimi Hendrix who famously set his guitar ablaze after his set. The next year, the band made their first appearance on the nationally televised Dick Cavett Show. This gave the band the exposure they desperately needed and set the stage for the success of their second album “Cheap Thrills.” 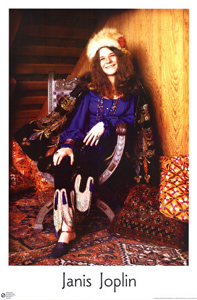 The single “Peace of my Heart,” eventually reached #1 on the charts where it remained for 8 weeks straight. The single’s popularity helped “Cheap Thrills” sell over a million copies in its first month. The band released “Live at Winterland ‘68” later that year, but soon after Janis announced she would be leaving the band. Her new group “The Kozmic Blues,” released their album “I Got Dem Ol’ Kozmic Blues Again Mama!” in 1969, and the record was later certified Platinum. Unfortunately Janis had become addicted to heroin, which made performances less than stellar. The group toured through North America and Europe and in August performed at the monumental Woodstock in upstate New York. Later that year the group played New York City’s Madison Square Garden, but shortly after, disbanded. 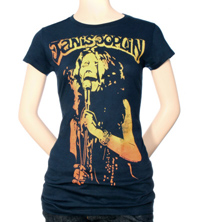 Janis reportedly traveled to Brazil, where she kicked her heroin addiction temporarily, starting again once she returned to the US. She then formed the “Full Tilt Boogie Band,” and after a brief reunion with “Big Brother” to play shows in San Francisco, went on a short tour with her new band in Canada. On August 12th Janis played what would be her final performance at Harvard Stadium in Boston. Tragically, while in the process of recording material for her new album, she was found dead from a heroin overdose in her hotel room in Los Angeles on October 4th 1970. Ironically Joplin achieved her greatest success after her death. In 1971 Full Tilt Boogie released their album “Pearl.” The album went on to sell more than 4 million copies, and 1973’s “Janis Joplin’s Greatest Hits” sold more than 7 million copies. Since then there have been numerous compilation albums with the most recent addition “Very Best of Janis Joplin” released in 2007. Although Joplin’s career was short, her contributions to the world of music seem almost to be a snap shot of an era that even though has long passed, is still remembered and deeply cherished.