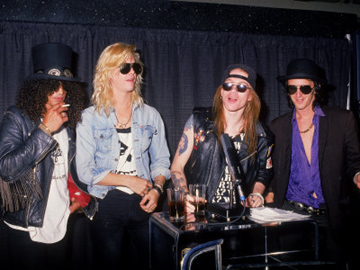 Guns N’ Roses started in Los Angeles California in 1985, when singer Axl Rose and guitarist Izzy Stradlin became friends. They had both been in the bands “Hollywood Rose,” and “L.A. Guns,” separately, so they simply combined elements of each name. By the time 1987 rolled around Guns N’ Roses lineup included singer Axl Rose, lead guitarist Saul Hudson aka Slash, bassist Duff McKagan and drummer Steve Adler.
The band released their debut album “Appetite for Destruction,” on July 21st, 1987. To say that the album was successful seems like a gross understatement. Claiming the coveted #1 spot on the Billboard 200 charts, the record sold a staggering 18 million copies in the United States alone. “… Destruction,” included what would become some of the band’s most well known and popular songs, as well as staples of rock radio for years to come. The album included “Welcome to the Jungle,” “Sweet Child O’ Mine,” and “Paradise City.” Music videos accompanied these particular singles and were played very frequently on MTV. 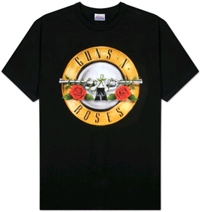 The band rode the wave of success on a tour through out the United States in 1988. On August 28th, the band played at the gigantic “Monsters of Rock” festival in Castle Donington in Leicestershire, England. Performing with bands such as Iron Maiden, KISS, Megadeth and David Lee Roth proved just how popular the band had become in such a short time. Unfortunately during the group’s performance of the song “It’s So Easy,” two people were crushed to death as the massive crowd of nearly 100,000 people jostled for better positions. The tragedy actually resulted in the cancellation of 1989’s show. Somewhat ironically, these events seemed not only to give the band more attention, but also increase their fan base.

It was next to impossible, even for a band big as Guns N’ Roses had become, to duplicate or surpass the success of their debut album with their follow up. Released in 1988, “G N’ R Lies,” was still incredibly successful. Claiming the #2 spot on the charts, the album sold more than 5 million copies in the US alone. Despite the fact that the album didn’t contain the hit singles that “… Destruction” had, the record kept the band fresh in the fan’s minds, and made sure they would not be forgotten about by the time they were ready to release their next album. Despite the band’s success, and most likely because of it, there was fighting and drug abuse among the members. In July of 1990, drummer Steven Adler was fired and replaced by Matt Sorum. 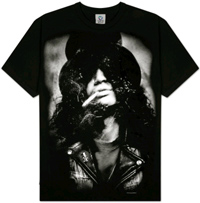 Hard at work, the band had created enough music for two albums. Rather than combine all their new material in one colossal album, the band decided to put out their new record in two parts. Released on the same day, the album was an example of marketing genius. “Use Your Illusion I” debuted at #2 on the charts and sold 685,000 copies in it’s first week. “Use Your Illusion II” took the #1 spot on the charts and sold over 770,000 copies in its first week. When all was said and done, the albums sold more than 7 million copies apiece, in the US alone. It’s easy to understand why, with a song list that included “Live and Let Die,” “You Ain’t the First,” “November Rain,” “Knockin’ on Heaven’s Door,” and “You Could Be Mine.” The “Use Your Illusion World Tour,” which supported the albums, lasted 28 months. 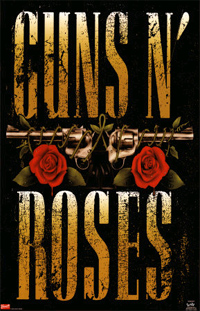 Guns N’ Roses returned in 1993 with the release of “The Spaghetti Incident?” The album consisted entirely of cover songs from various artists such as The Stooges and Soundgarden. The album’s most peculiar and controversial song was “Look At Your Game, Girl,” written by the infamous murderer Charles Manson. Although it was originally a hidden track, when the album was later reissued, Manson’s song was appropriately the 13th track. “The Spaghetti Incident?” would be Guns N’ Roses final studio album for 15 years. The band never officially broke up, but after Slash and Duff McKagan exited the band, Axl Rose was the only original member that remained. There were rumors of the fabled album “Chinese Democracy,” being in the works as early as 1994, but the album wasn’t officially released until November 23rd, 2008.
The album, in typical G N’ R fashion, made it to the #3 spot on the charts, and has sold more than a million copies in the US. The band’s lineup currently consists of members Axl Rose, Dizzy Reed, Tommy Stinson, Chris Pitman, Richard Fortus, Ron Thal, Frank Ferrer and DJ Ashba, but is likely to change. The band does not currently have any tour dates scheduled.