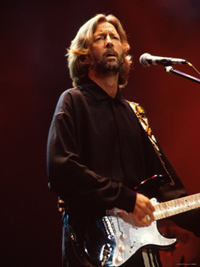 Eric Patrick Clapton was born March 30th, 1945 in Ripley, Surrey, England. Eric grew up in England and got his first acoustic guitar at age 13. He spent hours upon hours practicing so he would be able to emulate the blues music he adored. Eric left school in 1961 and attended the Kingston College of Art in London for a short time. In 1963 Clapton joined his first band, The Roosters, at the young age of 17. In October of that year Clapton joined The Yardbirds, who had taken over as the house band at the Crawdaddy Club, a spot that had recently been held by the Rolling Stones. The band signed with Columbia Records in February of 1964 and released their debut live album “Five Live Yardbirds,” on December 4th, 1964. Clapton toured with the band throughout England and contributed to the song “For Your Love,” which would become the group’s first hit after he departed in 1965.

Clapton then joined the blues band John Mayall & the Bluesbreakers, in April of 1965. Although he quit a few months later, Clapton rejoined the band that November and earned a reputation as a stellar blues guitarist. In July 1966 Clapton left the Bluesbreakers with band mate Jack Bruce. Clapton, Bruce and drummer Ginger Baker then formed the psychedelic rock band Cream. It was with Cream that Clapton first performed in the United States, at the RKO Theater in New York in March of 1967. Cream had a short, but hugely successful run that produced hits such as “Sunshine of Your Love,” “White Room,” and “Crossroads.” The members of Cream went their separate ways in 1968, and Clapton continued on the path to superstardom. 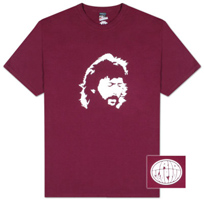 Eric had become good friends with Beatles guitarist George Harrison, and had the honor of playing on his debut solo album, “Wonderwall Music” which was released in December of 1968 in the US. Clapton then rejoined his former band mate Ginger Baker to create the “super-group” Blind Faith, which also consisted of Steve Winwood and Ric Grech. The band’s one and only album “Blind Faith,” was released in August of 1969 and skyrocketed to the top of the American charts. The band broke up shortly afterwards and Clapton, who had grown somewhat tired of the constant focus placed on him, toured with the American band Dealaney and Bonnie and Friends. Eric also famously performed with John Lennon and Yoko Onos’ Plastic Ono Band at the Toronto Rock and Roll Revival in September of 1969. 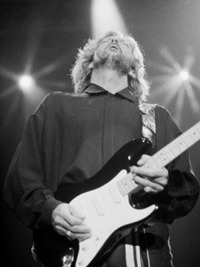 In August of 1970 Clapton released his self-titled debut solo album “Eric Clapton.” The album scored the #13 spot on the US charts and included the song “After Midnight.” That same year Clapton formed Derek and the Dominos with his former “Dealaney” band mates Bobby Whitlock, Carl Radle, and Jim Gordon. The band only produced one album entitled “Layla and Other Assorted Love Songs.” Despite the fact that the record peaked at #16 on the charts, it produced what is one of Clapton’s most recognizable hits, “Layla.” After the band broke up in 1971, Clapton withdrew from the public eye briefly, and battled drug addiction. He returned with assitance from The Who’s Pete Townshed, who helped get him a “comeback” show. Clapton later appeared in the film version of The Who’s rock opera “Tommy,” playing the role of the Preacher. 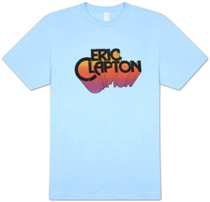 “461 Ocean Boulevard,” released in July of 1974, would become Clapton’s second solo album. The record topped the American charts and included Clapton’s now classic remake of Bob Marley’s “I Shot the Sheriff.” Over the years Eric Clapton has had phenomenal success as a solo artist, selling millions of records and winning numerous Grammy Awards. He was ranked #4 on Rolling Stones list of the “100 Greatest Guitarist of All Time,” is a living legend and is reportedly the only person to be inducted into the Rock and Roll Hall of Fame on 3 separate occasions, for his work with the Yardbirds, Cream, and as solo artist. Eric Clapton’s continuing contributions to the world of music cannot be overstated. As of 2009, Eric Clapton is still active and has future tour dates scheduled.