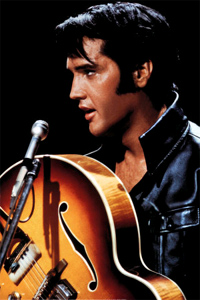 On January 8th 1935, in Tupelo, Mississippi, rock and roll royalty was born, Elvis Aaron Presley. Due to the fact that his father Vernon needed work, in 1948 Elvis relocated to Memphis, Tennessee with his family. Elvis graduated from L. C. Humes High School in 1953, and soon after, needing a birthday present to give to his mother, went to Memphis Recording Service to record two songs. He recorded “My Happiness” and “That’s When Your Heartaches Begin.” Later he returned to record “Casual Love Affair” and I’ll Never Stand In Your Way” and met Sam Philips who was the owner of Sun Records. Philips was impressed by Elvis’s voice, and after a few recording sessions that were less than stellar, paired him with guitarist Scotty Moore and bassist Bill Black with the hopes that playing with others would help Elvis “find his voice.” Philips was right, and in July of 1954, with the accompaniment of Morore and Black, “Blue Moon of Kentucky” and “That’s All Right” became Elvis’ first singles. 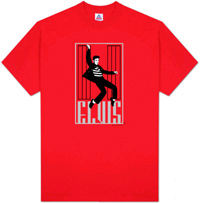 The very next day Elvis performed for the first time publicly. Appropriately enough, seeing as he had been working as a truck driver previously, Elvis sang on the back of a flatbed truck. About a month later “Colonel” Tom Parker became Elvis’ manager, which was a relationship that would continue for the rest of Elvis’ life. Although Elvis’ was becoming more popular by the day, on November 20th 1955, Sam Phillips sold Presley’s recording contract, along with all his previously recorded material, to RCA for a mere $35,000. Despite the fact that his first 5 singles didn’t break into the charts, “I Forgot to Remember to Forget” becomes #1 on the country charts. Ironically, this is Presley’s first single for RCA, and his last for Sun. His next single, “Heartbreak Hotel,” becomes universally popular and holds down the #1 spot on the charts for 8 straight weeks. Four months later Presley releases a double-sided single, which includes the songs “Don’t Be Cruel” and “Hound Dog.” It is immensely popular and sits in the #1 spot for 11 weeks. At this point it’s safe to say that Elvis is a superstar. 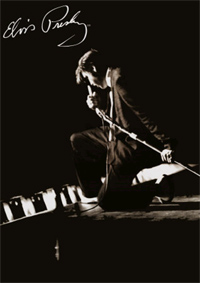 Now about as famous as anyone can possibly hope to become in the world of music, Presley lands his first movie role in “Love Me Tender.” Earlier in the year Presley had performed the song “Love Me Tender” on the Ed Sullivan Show and attracted and estimated TV audience of a mind-blowing 54 million viewers. Given the fact that televisions weren’t nearly as common as they are today this is an almost unfathomable number. Not surprisingly over the next year Elvis releases some of his most famous songs including “Jailhouse Rock,” “Hound Dog,” and “All Shook Up,” and continues his acting career which will include 30 more movie roles. Presley’s success seems unstoppable, and virtually was, but on December 19th 1957 Presley is drafted into the US Army where he serves 2 years in Germany. During his tour Elvis meets his future wife Priscilla, whom he marries 8 and a half years later. The couple has a daughter, Lisa Marie Presley, who is born on February 1st 1968. 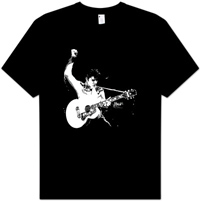 After being out of the music scene for sometime, due to his service in the military and acting career, Presley needs a way to get back into the public’s eye. On December 8th 1968, NBC airs a hour-long special simply titled “Elvis.” It is a huge success and Presley reclaims his throne as the King of Rock and Roll. On July 31st 1969 with guitarist and bandleader James Burton, Elvis returns to performing. He performs in Las Vegas for capacity crowds and on the road. Unfortunately his personal life isn’t going as well as his professional one and in 1973 he and wife Priscilla divorce. The divorce takes a very big toll on Presley, and an unhealthy diet along with increasing drug problems cause his health and physical appearance to quickly deteriorate. On June 26th 1977 Presley’s performance at the Market Square Arena in Indianapolis, Indiana, would be his final one. On August 16th 1977 Presley dies of cardiac arrest.

Elvis Presley is the biggest thing to happen to music in modern history. He is the poster boy for Rock and Roll, and is the scale on which every other performer to proceed him can be measured. Between October 2005 and October 2006 Elvis’ estate earned 42 million dollars, which makes him second only to Nirvana’s Kurt Cobain on Forbes’ top earning dead celebrities list. His popularity as a musician and pop culture icon does not seem to fade with time and it’s hard to see a way that a performer in this day and age could rise to the level of his stardom. At this point the memory of Elvis has almost become larger and more fantastic than the man himself. He is an intricate part of music history and a part of Americana itself. He is the King of Rock.