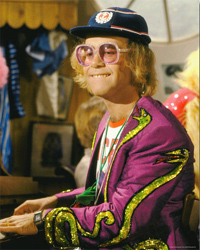 Reginald Kenneth Dwight was born March 25th, 1947 in a suburb of London, England, with arguably the least appropriate name for a future megastar. From an early age, young Reginald showed promise musically and at age 11 won a scholarship to the Royal Academy of Music in nearby London. He later joined a group named “Bluesology,” whose members were comprised of singer Long John Baldry and saxophonist Elton Dean. Needing a stage name, Reginald combined elements of two of his band mates name’s and came up with “Elton John.” Now armed with a name fit for musical success, he answered an ad that had been placed by Liberty Records. He started writing music to accompany lyrics that had been written by Bernie Taupin, and in 1967 after the song “Scarecrow” was recorded, the two met for the first time. They hit it off and joined DJM Records, where they would be employed as staff songwriters. There the two composed music for artists such as Roger Cook and Lulu. 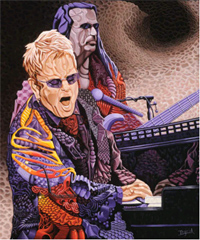 In 1968 the pair started writing music that Elton would record. Their first single became “I’ve Been Loving You,” and afterwards he recorded the album “Empty Sky,” which was released in June of 1969. The album eventually sold 500,000 copies. In 1970 he released a self-titled album, which included the track “Your Song.” The single became a top 10 hit in the US, and the album went on to sell 3 million copies worldwide. In October of the same year Elton released “Tumbleweed Connection.” The album made it into the top 10 of the Billboard Top 200. On May 19th, 1972 Elton, who was now accompanied by guitarist and back up vocalist Davey Johnston, bassist Dee Murray, and drummer Nigel Olsson, released the album “Honky Chateau.” With hit singles like, “Honky Cat,” and “Rocket Man (I Think It’s Going to Be a Long Long Time),” he achieved his first #1 album in the US. The next year, included on the album “Don’t Shoot Me, I’m Only the Piano Player,” Elton’s “Crocodile Rock,” became his first #1 single in the US. Seeming only to gain momentum, the hits kept coming. “Saturday Night’s Alright for Fighting,” and the #1 hit “Bennie and the Jets,” made the album “Goodbye Yellow Brick Road” a success in both America and the UK. 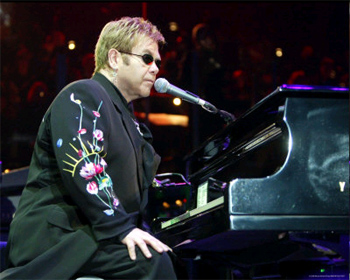 By the mid 1970’s Elton was a hot commodity to say the least. In 1975 he covered the Beatles’ legendary song “Lucy in the Sky With Diamonds,” with none other than John Lennon accompanying him on guitar. The song, in typical Elton fashion, became a #1 hit. As if attention from possibly the biggest star in the world wasn’t enough, Pete Townshend, guitarist from The Who, asked Elton to play a role in his upcoming rock opera “Tommy.” Elton accepted and performed the song “Pinball Wizard.” After being released as a single, the song made it to the #7 spot on the charts in the UK. Elton’s huge success was helped along by the fact that he could pull out all the stops when it came to his live show. Although he was a relatively short man who was losing his hair, he was an overwhelming stage presence, sporting his signature sunglasses and performing in costumes, which included Disney’s Donald Duck. The constant work was starting to take its toll however, and in 1976, Elton announced his plans to retire from performing. His retirement only lasted 15 months, and in 1979 he reunited with longtime partner Bernie Taupin and continued making music.

The next 2 decades were a roller coaster ride for Elton. In 1982 his song “Empty Garden (Hey Hey Johnny),” became a hit. This was bitter sweet because the song was a tribute to his now deceased friend John Lennon. In August of the same year, Elton performed the song to a sold out Madison Square Garden in New York City, with Lennon’s widow Yoko Ono, and son Sean Ono Lennon, who was Elton’s godson, by his side. In 1984 he entered a short-lived marriage with Renate Biauel. This was a surprise because Elton had claimed to be bisexual. In 1986 after losing his voice while touring Australia, he had polyps removed from his vocal chords, which subsequently altered his famous voice. By 1990 he checked himself into a hospital to try and free himself from addictions to drugs and alcohol. He bounced back quickly however, finally scoring himself a #1 hit in the United Kingdom with the song “Sacrifice.” In 1991 he received a Grammy Award for Best Instrumental Composition for “Basque.” 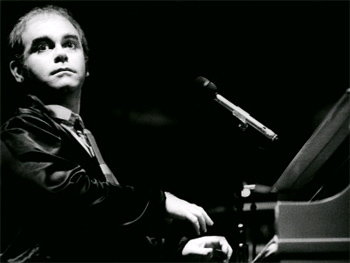 The mid 1990’s held even more accolades for Elton. In 1994 he was asked to write the music for Disney’s animated movie “The Lion King.” Elton partnered with Tim Rice, and the movie as well as the soundtrack became a huge success. The soundtrack sat atop the Billboard charts for 9 straight weeks and sold over 15 million copies. Elton’s hit “Can You Feel The Love Tonight” won him the Academy Award for Best Song. Two years later Elton was inducted into the Rock and Roll Hall of Fame. The year after that, in 1995, Elton received possibly the biggest honor of his life when he was made a “Commander of the Order of the British Empire.” In other words, he was knighted by the Queen of England. Elton John has done a tremendous job of staying relevant in today’s ever changing world of music. In 2001 he performed with rapper Eminem at the Grammy Awards. In 2005 he performed in London at the Live 8 concert with superstar Bono of U2, as well as others. In 2007 he worked with rapper/producer Timbaland on the song “2 Man Show.” Currently he can be seen in concert virtually anywhere in the world performing with his band, or with fellow “Piano Man” Billy Joel. Sir Elton John has been an unstoppable hit machine for over 30 years now and shows no signs of slowing down. He has done almost everything when it comes to music and more importantly he has done it extraordinarily well. He is an inspiration to musicians everywhere and it’s hard to think of anyone more worthy of the label Legend.