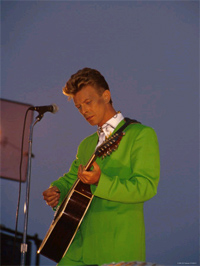 Not everyone who shares a birthday with Elvis Presley, January 8th, becomes a music superstar, but David Robert Jones, born in London England on January 8th 1947, did. David Jones, who later changed his name to David “Bowie” to avoid being mixed up with Davy Jones of “The Monkees,” started his musical career at the age of 13 when he decided to play the saxophone. Bowie, in true rock star form, was left with one pupil permanently dilated after George Underwood punched him with a ring on his finger. Bowie fortunately was still able to use the eye, and he and Underwood remained friends. Underwood even contributed artwork to a few of Bowie’s albums. In 1962 Bowie formed his first band, “The Konrads” and would be involved with bands such as “David Jones and the Buzz” and “The King Bees,” the band with who, in 1964, he released his first single, “Liza Jane.” Bowie went on to play in “Davey Jones and the Lower Third” and “The Manish Boys” which included a pre-Led Zeppelin session guitarist Jimmy Page. Both bands released singles in 1966. 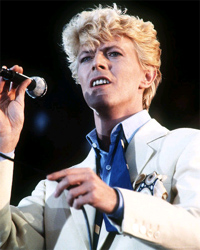 The same year Bowie stared his solo career. In 1967 he recorded 3 singles with Pye Records, and in 1967 signed with Dream. That same year Bowie released the album “The World of David Bowie” as well as a few other singles. In 1969, which was the same year as the historic US moon landing Bowie released “Space Oddity”. The album went on to rank #5 on the UK charts. The next year in London’s “Speakeasy” he met his future wife Angela Barnett. In November of 1970 Bowie teamed up with guitarist Mick Ronson, bassist Tony Visconti, and drummer Michael Woodmansey to record and release the album “Man Who Sold the World,” which included the song “All the Madmen.” In June of 1971 Bowie and his wife gave birth to a son “Zowie Bowie.” Zowie later, and understandably so, went on to be known by his legal name Duncan Zowie Haywood Jones. In May of 1972 Bowie “comes out of the closet” in an interview with Melody Maker, a British Magazine, although he is still married. This “admission” is a great transition to Bowie’s flamboyant alter ego “Ziggy Stardust.” 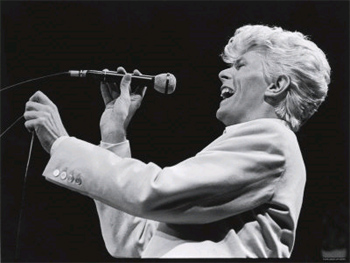 As the rainbow color body-suited “Ziggy Stardust”, Bowie forms the band “Ziggy Stardust and the Spiders from Mars,” which includes Bowies band mates Ronson, Woodmansey and bassist Trevor Bolder as the “Spiders from Mars.” The band releases “ The Rise and Fall of Ziggy Stardust and the Spiders from Mars” in 1972 which includes the songs “It Ain’t Easy,” “Ziggy Stardust,” and “Starman.” That same year Bowie put on his producer’s hat and helped out on Mott the Hoople’s “All the Young Dudes,” which became a #3 hit in the UK. On September 12th 1972 Bowie, along with the “Spiders from Mars,” embarked on their first US tour with their first stop being Cleveland, Ohio. By September 28th, Bowie played to a sold out crowd in New York City at Carnegie Hall. In February of 1973, Bowie released “Space Oddity” for the fist time in the US and it became a Top 40 hit, which is a first for Bowie on American soil. The same year they also released “Aladdin Sane”, but later the members of “Ziggy….” go their separate ways when Bowie “retires from live performing.” In March of 1973 the Bowie produced “Transformer,” which is a Lou Reed song, breaks into the Top Forty. 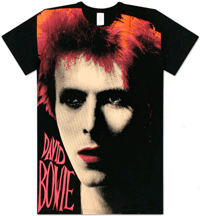 In 1975, while in Philadelphia, Bowie records “Young Americans,” which reaches #9. Due to the fact that at the time Philadelphia is the hub of “black music,” Bowie is greatly influenced. Bowie forms a new group, which includes a guitarist by the name of Carlos Alomar who has also worked with the “Godfather of Soul” James Brown. With the help of Alomar and John Lennon, Bowie writes and releases “Fame”, which becomes Bowie’s first American #1 hit. After living in the US for sometime, Bowie relocates to Germany where he, among other endevors, begins to record with Brian Eno. In 1977 they release the albums “Low” and “Heroes,” and, in 1979, “Lodger”. Bowie also continues to produce for the likes of Iggy Pop, for whom he also plays piano with on tour.

In 1980 Bowie releases “Scary Monsters,” and even takes on the lead role in the Broadway production of “The Elephant Man.” Unfortunately in on February 8th 1980 he divorces wife Angela Barnett. Continuing with his career, Bowie signs with EMI in 1983 and releases “Let’s Dance,” which is a huge success and includes the hits, “Let’s Dance,” “Modern Love,” and “China Girl.” 9 years later Bowie marries Iman, who is a Somalian supermodel. The next year he releases an album, which features guitarist Lenny Kravitz, titled “The Buddha of Suburbia,” and in 1997, proving that 34 years into his career he is far from washed up, holds his 50th birthday celebration, selling out Madison Square Garden and performing with artists such as the The Foo Fighters, Billy Corgan of the Smashing Pumpkins and Robert Smith of The Cure. David Bowie’s continued success is completely owed to the fact that he has continually changed with the times. He has the ability to move gracefully through different genres of music and be relevant. Bowie continues to capture the attention of a new generation by performing with bands such as Arcade Fire and TV on the Radio, bands that are popular with an audience whose parent perhaps were not born when Bowie first started off. Bowie’s life is a story of continued success, and he is a great example for anyone who ever wonders what the key to success really is: flexibility and perseverance.