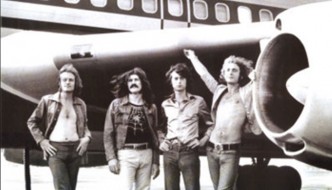 Click on the image to buy this poster On October 25th 1968, at the University of Surrey, Guildford in the United Kingdom, “Led Zeppelin” played their first live show as a band. Their name is often attributed to a term that fellow musician John Entwistle, bassist for The Who, used to describe a bad gig; a “lead zeppelin”. It is said that the “a” was dropped from the word “lead” so that it would … END_OF_DOCUMENT_TOKEN_TO_BE_REPLACED