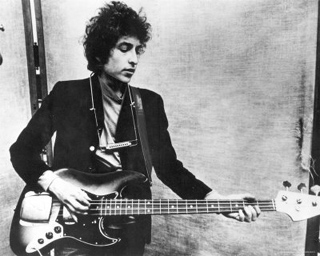 On May 24th 1941 Robert Zimmerman is born in Duluth Minnesota. He is better-known as “Bob Dylan”, one of the greatest American “Poets.” By the age of 10 “Dylan” was already playing the piano, harmonica, and to complete his musical toolbox, he also learned the guitar. He later traded his electric guitar for an acoustic one to mimic the styles of other folksingers. In October of 1959 Dylan cut his teeth at a Minneapolis coffeehouse named the Ten O’clock Scholar, and 2 years later made the move to New York City where there was a much bigger folk music scene. Shortly after, on April 11th 1961, Dylan opened for John Lee Hooker, playing at the Gerde’s Folk City, and after playing harmonica with Carolyn Hester was signed to Columbia Records, where he has been ever since. 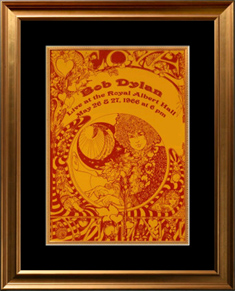 Dylan released his first album, which was Self-titled, in 1962. It was made up mostly of cover songs, but included 2 originals, “Talking New York” and a song for his idol Woody Guthrie, who lay dying in a New Jersey hospital, simply named, “Song for Woody.” His first album, according to producer John Hammond, only took a few hours to record. In his second album Dylan started to come in to his own. “The Freewheelin’ Bob Dylan,” was released in 1963 and made it to #22 on the charts. This album included the songs, “A Hard Rain’s A-Gonna Fall,” and “Masters of War.” In 1964 Dylan released the famous “The Times They Are A-Changing” which included his now very famous song by the same name. That same year Dylan reportedly introduced the boys from the Beatles to marijuana in a hotel room. It’s safe to say 1964 was a busy year for Dylan. 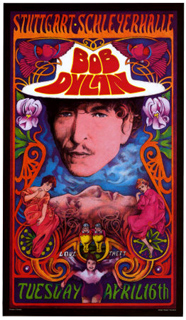 1965 marked proved to Dylan that the times truly were “a-changing.” As the majority of the rock world started to move toward electric guitars, Dylan had to make the choice whether to stick with the acoustic folk music he was becoming known for, or transition into rock. In July of 1965 at the Newport Folk Festival, Dylan made his first attempt to make that change with a less than positive response. With the Paul Butterfield Blues Band backing him Dylan took the stage with an electric guitar, only 3 songs into his set the displeased crowed booed him off the stage. Although he returned with an acoustic shortly afterward, the electric guitar wasn’t going away. That same year with the release of the album “Highway 61 Revisited,” Dylan achieved his first #1 hit. It came in the form of the now classic “Like a Rolling Stone.” His fans had obviously started to come to grips with the idea of Dylan playing “plugged in.” The album eventually sold more than 1 million copies. 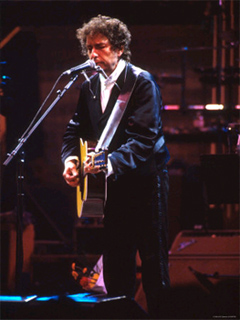 The next year, in July of 1966, Dylan was seriously injured in a motorcycle accident, which kept him out of the public eye for almost a year and a half. During that time period he recorded almost 100 songs with The Band who consisted of Canadian rockers Robbie Robertson, Richard Manuel, Garth Hudson, Rick Danko and American Levon Helm. While he was injured a Greatest Hits album was released that later went on to sell over 5 million albums. Selections of the 100 songs he had recorded with The Band were eventually released years later as “The Basement Tapes.” 1967’s “John Wesley Harding” was to be Dylan’s first album after his accident. A song from the album called “All Along the Watchtower,” was famously covered by Jimi Hendrix, and became his only “radio hit” while he was still alive. 3 years later, on June 9th 1970, and although he had attended the University of Minnesota as a younger man, Dylan received an honorary doctorate from Princeton University, which was just one of the many honors Dylan would go on to receive. Some of these honors include being inducted into the Songwriters Hall of Fame, although admitting that he though it was “…pretty amazing, really, because I can’t read or write a note of music.” He also was honored with multiple Grammy awards and to date is the only popular musician to be awarded the Pulitzer Prize in 2008.

Still alive and well, Bob Dylan continues to be a driving force and influence in the world of music, poetry and other various forms of art. On April 28th 2009 Dylan is set to release “Together Through Life,” which will be his 33rd studio album to date. Currently he can still be seen in concert performing on what was dubbed the “The Never Ending Tour” which is said to have commenced on June 7th, 1988. Dylan performs with some of music’s greatest talents and continues to inspire and influence new generations of artists. Few people have had as much impact on the world. Dylan not only epitomizes the American dream and spirit, but also embodies the qualities that we all hold dear and strive for in our own lives. Originality and individuality.