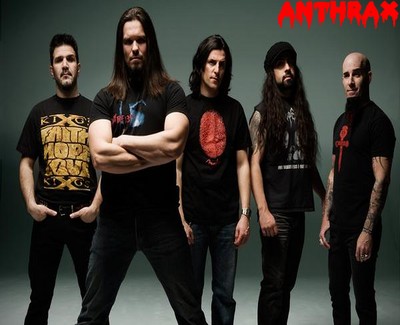 Scott Ian and Danny Lilker formed anthrax in 1981 in New York City. The guys were soon joined by drummer Dave Weiss and lead guitarist Greg Walls, and after going through a number of bass players, Lilker decided to take over the duties himself. The band recorded a demo, and in August of 1982 were joined by lead signer Neil Turbin. Greg D’Angelo replaced Dave Weiss, lead guitarist Greg Walls was replaced by Dan Spitz and the band recorded a second demo. After D’Angelo was replaced by Charlie Benante the band recorded the single “Soldiers of Metal.” The band was signed to Megaforce Records and by January of 1984 had released their debut album “Fistful of Metal,” although the record had been released the previous year in the UK where it reached the #8 spot on the charts. The band supported the album with a tour after which Danny Lilker parted ways with the group and was replaced by bassist Frank Bello. In August of 1984 Neil Turbin was relieved of his singing responsibilities and was eventually replaced by singer Joey Belladonna in 1985. 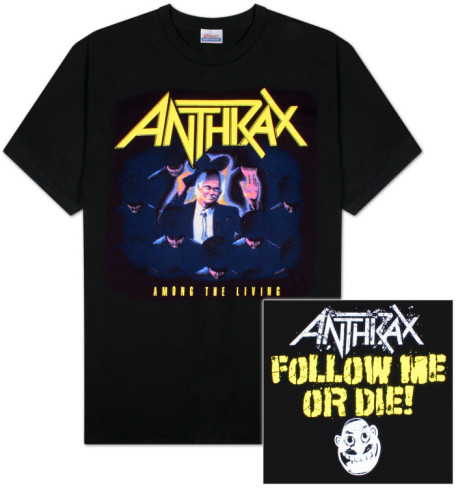 With Belladonna at the reigns the band released its second album, 1985’s “Spreading the Disease,” which was supported by a US/European tour. The record produced the hit song “Madhouse,” which prepared fans for the band’s March 1987 release “Among the Living.” This would be the band’s highest charting album thus far, reaching the #62 spot. “Among the Living,” would also earn the band it’s first Gold Record, selling more than 100,000 copies. With the 1988 release, “State of Euphoria,” Anthrax continued its climb up the charts, reaching #30. Like its predecessor, the album would receive Gold Certification. The record produced the hits “Antisocial,” which was a cover of a song originally by the band Trust, and “Now it’s Dark,” which was featured in the popular PC video game, “The Sims.” 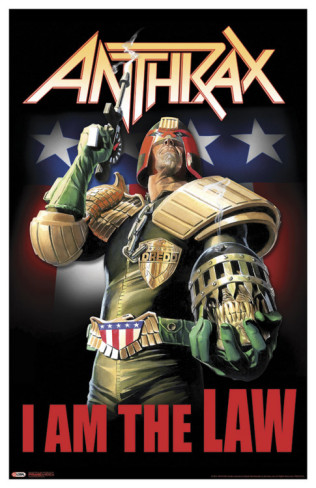 Although cross genre collaborations are quite common now, in 1991 Anthrax famously played with Public Enemy on their song “Bring the Noise.” The pairing lead to a tour featuring the two bands. In 1992 the band’s lineup changed once again when singer John Bush replaced Joey Belladonna. Keeping with the theme of change, the band reportedly signed a $10 million deal with Elektra Records. “Sound of White Noise,” would be the band’s first release with their new label, but unfortunately also be the last time they would see a Gold record to date. The album peaked at the #7 position with the help of the hit song “Only.” 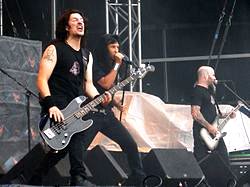 Two years later, and after the departure of Dan Spitz, the band released “Stomp 442,” on October 24th, 1995. Although the album reached the number 47 spot on the charts it quickly faded and failed to sell as expected. Since the album’s failure had reportedly been due in part to the fact that Elektra failed to promote it properly, the band released 1998’s “Volume 8: The Threat is Real,” with another record company. The album included songs such as “Inside Out,” and “Crush,” which was featured in the popular video game “ATV Off Road Fury.” Unfortunately the album sold poorly and failed to climb passed #118 on the charts. 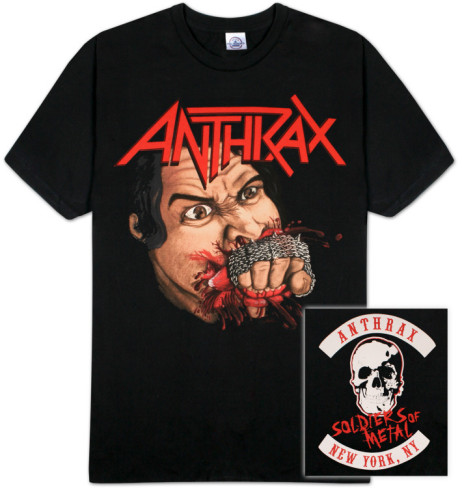 In 2002 Rob Caggiano joined the band as lead guitarist. On May 6th, 2003 the band released what has been their last studio album to date, “We’ve Come for You All,” with Sanctuary Records. The album features songs such as “Safe Home,” “Taking the Music Back,” and “Cadillac Rock Box,” which features the late guitarist “Dimebag” Darrell of Pantera fame. After recording the “live studio” album “The Greater of Two Evils,” Frank Bello was replaced by bassist Joey Vera. In 2005 Scott Ian, Charlie Benante, Dan Spitz, Joey Belladonna, and Frank Bello came together to perform the album “Among the Living” in it’s entirety on tour. In 2007 Dan Nelson and Rob Caggiano rejoined the band. It is reported that the band is finishing up its newest album, but as of June 2009, it has yet to be released. Anthrax is currently on a world tour with stops that include Amsterdam and London.