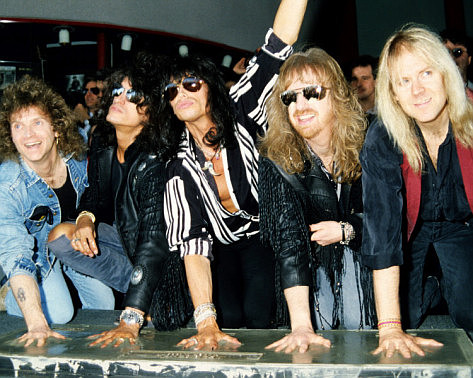 Steven Tyler and guitarist Joe Perry first met in 1969 while Steven was vacationing in Sunapee, New Hampshire. At the time Perry was performing in the “Jam Band” with bassist Tom Hamilton and drummer David Scott. In September of that year, Perry and Hamilton migrated to Boston and hooked up with drummer Joey Kramer who knew Steven. The next month, after Steven convinced the guys that he could take on the responsibilities of singing, Aerosmith was born. In 1971, after Brad Whitford joined the band and started playing rhythm guitar, the band’s line up was locked in. The guys started playing shows locally and after their managers got Columbia Records’ president Clive Davis to see them perform at “Max’s Kansas City” in New York City, they singed a recording contract and were given a $125,000 advance. The next year their self-titled debut album would be released. It included the single “Dream On,” which surprisingly only reached the #59 spot on the charts. “Aerosmith” eventually went on to sell over a 2 million copies. 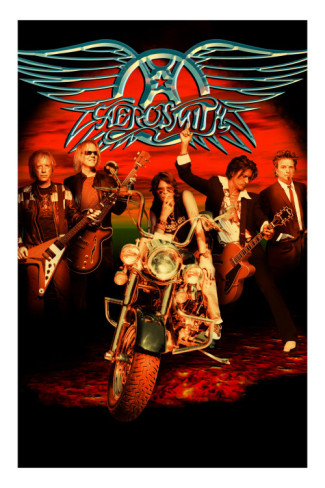 In 1974 “Get Your Wings” was released. The album included the now classic songs, “Train Kept A-Rollin’ (which was a cover), “ and “Same Old Song and Dance.” The album would eventually sell over 3 million copies. Despite the fact that they had achieved moderate success with their first two albums, it wasn’t until the 1975 release of “Toys in the Attic” that Aerosmith could take their place among the heavy hitters of rock. “Sweet Emotion” became the band’s first top 40 hit and because of it’s success prompted a reissue of the track “Dream On” which would climb to the #6 spot on the charts. The albums sales dwarfed their previous attempts, selling over 8 million copies. Riding the wave of success the band continued to tour and in 1976 released “Rocks,” which produced the major radio hits “Last Child” and “Back in the Saddle Again.” After sales of more than 4 million copies, the band was popular enough to play stadium shows. As their popularity increased so did their drug use, which started to create rifts within the band. 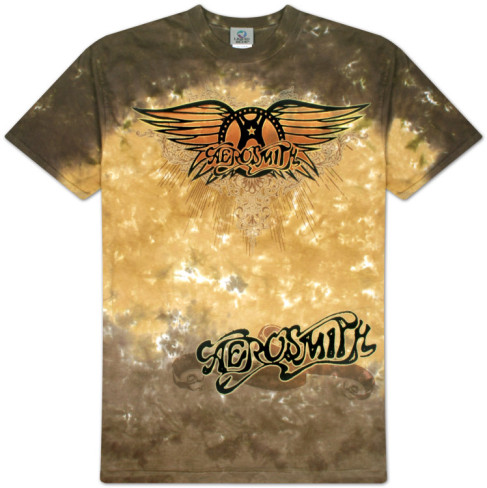 Aerosmith were now superstars, and had even appeared in the movie version of “Sgt. Peppers Lonely Hearts Club Band,” in which they covered the Beatles’ “Come Together.” After recording “Night in the Ruts,” in 1979, Joe Perry left the band due to conflict with Steven Tyler. He was quickly replaced by guitarist Richard Supa, and then by Jimmy Crespo, but “Night in the Ruts” didn’t achieve the level of success of their previous albums. Steven’s drug use got worse leading to incidents where he actually collapsed on stage. In 1980 the album “Greatest Hits” was released and sold a phenomenal 11 million copies in the US alone, but before the band was able to use the momentum of their tremendous record sales to make a come back, Steven was involved in a serious motorcycle accident which left the band out of commission. The next year Brad Whitford left the band as well, and in 1982 the unsuccessful “Rock in a Hard Place” was released. 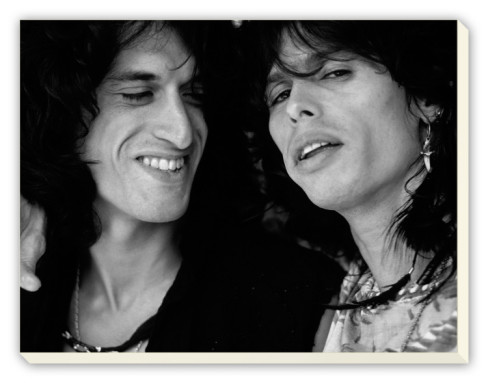 Two years later, in 1984, Joe Perry and Brad Whitford rejoined the group and the band returned to the road with their “Back in the Saddle” reunion tour. “Done with Mirrors” was meant to be their comeback album, but fell flat. It wasn’t until the band appeared on an up and coming rap group Run DMC’s cover of their song “Walk This Way” that the band gained some steam. Not only did the song boost Run DMC’s popularity and fan base, it also brought rap music into the mainstream, and introduced Aerosmith to a whole new generation of fans. Steven Tyler, as well as the rest of the members, cleaned up their acts and released “Permanent Vacation” in 1987. The album sold more than 5 million copies in the US and included the hits “Rag Doll,” “Angel,” and the unforgettable “Dude (Looks Like a Lady)” In 1989 they released “Pump,” which included the tracks “What it Takes,” “Love in an Elevator,” and the song that earned them their first Grammy Award for Best Rock Performance by a Duo or Group With Vocal, “Janie’s Got a Gun.” They supported the album with a 12 month tour and by making appearances absolutely everywhere including the Saturday Night Live sketch “Wayne’s World,” and the hugely popular show “The Simpsons.” 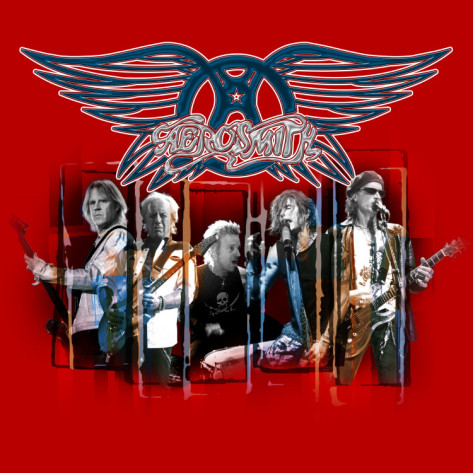 After “Pump” the band took some much-needed time off, returning triumphantly in 1993 with the album “Get a Grip.” The album debuted at #1 and included the singles “Living on the Edge,” “Amazing,” “Crazy,” “Eat the Rich,” and “Crying.” “… on the Edge” earned the band the Grammy for Best Rock Performance by a Duo or Group with Vocal in 1994, and “Crazy” earned the same award in 1995. It wasn’t until 1998 however that the band claimed the #1 single spot with the song “I Don’t Want to Miss a Thing.” The track was featured on the soundtrack to the movie “Armageddon” which starred Steven’s daughter Liv Tyler, along side Bruce Willis and Ben Affleck. The song was even nominated for an Academy Award, although the film itself was not. In 1999 the band won yet another Grammy Award for Best Rock Performance by a Duo or Group with Vocal with their song “Pink” which was included in the album “Nine Lives.” Two years later the band was inducted into the Rock and Roll Hall of fame and played at the “United We Stand: What More Can I Give” benefit for victim’s of 9/11 families. In 2008 the band again ensured it’s longevity and relevance, working with the creators of the popular game Guitar Hero to release “Guitar Hero: Aerosmith” which exclusively featured the band’s music. The band is due to release a new album soon and will kick off their world tour in June of 2009.