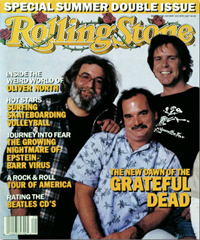 The Grateful Dead arose from the ashes of what was once the band “Mother McCree’s Uptown Jug Champions.” The “…Champions” initially consisted of Bob Weir, Rob McKernan (also known as “Pig Pen”), Bob Mathews and John Dawson. They became “The Warlocks,” and made their debut in July 1965. They played shows at the Carousel, Fillmore West, and Avalon in San Francisco, California, and that December the group, who had now become the “Grateful Dead,” played at what would be known as the “Acid Test.” This was a “multimedia event,” which consisted of attendees becoming very familiar with the hallucinogenic drug LSD, by way of consumption. In January of 1966 they played the Trips Festival, and were later signed to the record label MGM, although they would eventually make the switch to Warner Bros. 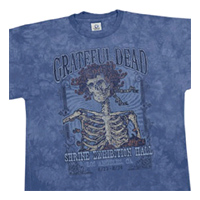 On March 17th, 1967 the “Dead” released their first album, “The Grateful Dead.” The album would eventually be certified Gold and reach the #37 spot on the charts. Although the band was consistently successful in terms of record sales, they were truly in their element when they took the stage. They played the Monterey Pop Festival, and in 1969 played what is probably the most famous music festival of all time, Woodstock. That same year they released the album “Live/Dead” which, consistent and contrary to it’s name at the same time, was a live album. The record included songs like “The Eleven,” and true to their “jam band” form, the 23 minute “Dark Star.” This album was from recordings of performances at The Fillmore in San Francisco. In 1970 they released “Workingman’s Dead,” which featured the songs “Uncle John’s Band,” and “Casey Jones.” The same year they also released “American Beauty” whose songs included “Ripple,” “Box of Rain,” and the famous “Truckin’.“ Later, in 1986 “Workingman’s Dead,” would be certified Platinum, and in 2001 “American Beauty,” would be certified double Platinum.

In 1971 they released their last album with Warner Bros, another live album entitled “Grateful Dead,” although it is commonly referred to as “Skull & Roses.” After leaving Warner Bros the group started their own record label, the simply named “Grateful Dead Records.” After a 1972 tour of Europe, the band released the triple live album, “Europe ’72,” which would outsell and out chart their previous live albums. Unfortunately Rob Mckernan died shortly after the tour of liver disease and was replaced by Keith Godchaux and his wife Donna. To say that the Deads’ concerts were an experience would be a gross understatement. In Watkins Glen, New York they played to 600,000 cheering “Dead Heads,” which is the title their fans had proudly come to be known by. With a sound system that could be as big as 23 tons, it is safe to say not one of them would have a hard time hearing, until maybe afterwards when music would be replaced by the high pitched squeal that every concert go-er has experienced at one time or another. 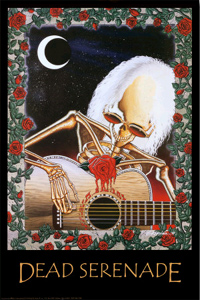 Between 1974 and 1976, the group’s members worked on side projects of their own, and in 1977 got back together and released, “Terrapin Station,” which was followed up by the 1978 album, “Shakedown Street.” That same year the band put on a concert in front of the Great Pyramids in Egypt. This was very fitting because their name “The Grateful Dead,” was reportedly a reference to a line from an Egyptian prayer that Garcia came across while using a dictionary. In 1979 Brent Mydland replaced Keith Godchaux and his wife Donna. The next year Godchaux was tragically killed in a motorcycle accident. The 1980’s would prove a somewhat troubling time for the band. In January 1985 Garcia was taken in to custody for procession of heroin, and the next year, due to his continued drug use, ended up in a diabetic coma for 5 days. In 1987 the band seemed to overcome their setbacks and released the record “In the Dark.” The album was their first to break into the top 10 and the song “Touch of Grey,” became their only top 10 single. The album would later be certified double Platinum. 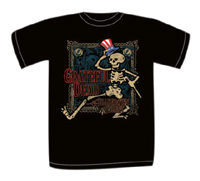 Despite their comeback, the Dead Heads brought the band some unwanted publicity. Between two shows 125 fans were arrested in 1989. The same year at a show in New Jersey and again at a show in Los Angeles a fan was accidentally killed. In July of 1990 Brent Mydland died of a drug overdose, and was replaced by Vince Welnick. Two years later the band’s de facto front man Jerry Garcia was admitted to the hospital due to fluid in his lungs and an enlarged heart. After getting out of the hospital Garcia continued playing with the band. There 1994-1995 tour grossed 52 million dollars. In January of 1995 the band released a greatest hits album entitled “Skeletons From the Closet.” It would become their best selling record, being certified triple Platinum. Despite his constant success, Garcia battled personal demons. He sought treatment but died of a heart attack at the age of 53. Four months later the band decided to call it quits. The Grateful Dead were the definitive live band whose contributions to the world of pop culture extended far past the world of music. From artwork to Ben and Jerry’s famous “Cherry Garcia” ice cream, it is obvious that the band is no less than iconic. They played more than 2,000 concerts between their inception and Garcia’s death, and have recently rejoined and perform under the name “The Dead.” Although Garcia’s absence is hard to ignore, it is great that his spirit is still alive and well in the form of The Grateful Deads’ music. The only thing bigger than man himself is his memory, which can now be passed on to new generations.