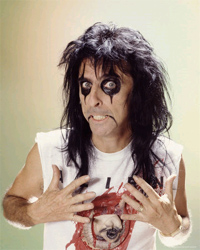 Vincent Damon Furnier who would later go on to be known as Alice Cooper, was born on February 4th 1948 in Detroit, Michigan. Vincent moved to Phoenix Arizona as a young boy, and had his first taste of rock-stardom when he performed at age 16 for a school talent show.

Vincent accompanied by friends, entertained as “The Earwigs,” and despite the fact that they didn’t actually play any instruments, lip- synced popular songs. After learning how to actually play instruments, the boys formed “The Spiders,” whose lineup included singer/harmonica Vincent Damon Furnier, lead guitarist Glen Buxton, rhythm guitarist John Tatum, bassist Dennis Dunaway and drummer John Speer. Sporting a black spider web back drop, the band played around Phoenix and in 1965 released their first single which was a “Blackwells” cover, “Why Don’t You Love Me.” Michael Bruce replaced John Tatum and the band gained local radio airplay with the song “Don’t Blow Your Mind.” The group had been back and forth between Los Angeles performing and had become know as “Nazz,” around the same time Neal Smith had taken over the drumming responsibilities. However since the name was already taken, they changed it to “Alice Cooper.” By 1968 the band had taken up residence in LA and after being signed by Straight Records, owned by Frank Zappa, released their debut album in 1969 “Pretties For You.” 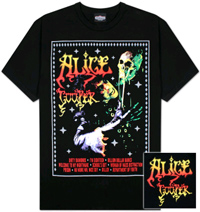 The band was becoming known for it’s energetic antics on stage. It was rumored that at one performance Vincent, who by this time had become known as Alice Cooper, had torn the head from a live chicken and drank it’s blood. Although there was a chicken onstage at one point during a show, Cooper had simply thrown it over the crowd thinking it would fly away. Unfortunately the chicken landed in the audience and was ripped apart by concertgoers. As they say, “There’s no such thing as bad publicity,” and this “Foul Incident” actually increased the band’s popularity. The band released their second album “Easy Action” in June of 1970. When it failed to sell as well they had hoped, the band moved back to Cooper’s native Detroit.

In November of 1970 the band finally broke into the charts with the single “I’m Eighteen.” The song reached #21 and became the first of many memorable songs from Cooper. The next year they released the album “Love and Death.” The album claimed the #35 spot on the charts and would eventually be certified Platinum. The record also added to the band’s repertoire, which fueled the fire that was now their explosive stage show. Among other things, the band’s antics now included front man Cooper being “electrocuted” in a faux electric chair. In 1971, after Warner Bros Records (who had purchased Straight Records) renewed the bands contract, the album “Killer” was released.

“Killer” ranked higher on the charts than their previous albums, reaching #21. It was also certified Platinum. Looking for new ways to entertain fans during their live shows, and scare their parents, Cooper started decapitating baby dolls, draping himself in Boa constrictors and “hanging” himself on stage. 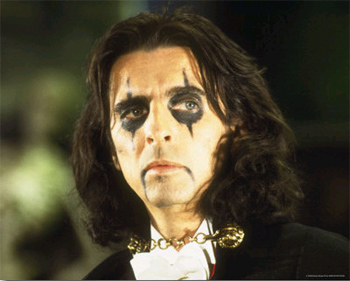 With the June 1972 release of the album “School’s Out,” Alice Cooper officially solidified their place in pop culture. The album’s title track “School’s Out,” is probably Alice Cooper’s best-known song. The single was a #1 hit in the UK and placed in the top 10 in the US. The album itself peaked at #2 in the US and sold more than a million copies stateside. The band followed “School’s Out” with what would be their first and only #1 album, “Billion Dollar Babies,” in February 1973. The album sold more than a million copies in the US and produced the classic song “No More Mr. Nice Guy,” which is still a staple of the radio today. The band also introduced the mother of all execution techniques to their stage show; the Guillotine. Next the band released “Muscle of Love.” Although it failed to achieve the success “Billion Dollar Babies,” the album still made it to the #10 spot on the charts. “Muscle…” would also be the last album that would be released by “Alice Cooper” the band. Alice Cooper the man (Vincent Damon

Furnier) parted ways with his band mates and moved back to Los Angeles. Cooper released his first solo album in 1975 entitled “Welcome To My Nightmare.” The album featured Cooper backed by different musicians and produced the single “Only Women Bleed.” The song reached #12 on the charts and the album was certified Platinum. 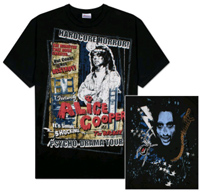 Like many of his peers Cooper ran into problems with alcohol abuse. In one incident Cooper tripped on stage and fell head first into the ground below. In 1977 briefly checked himself into the hospital. Cooper continued to release albums but also continued to struggle with alcoholism and by 1983, ended up back in the hospital. After moving back to Phoenix , Cooper signed with MCA Recordings in 1985. He triumphantly returned with the album “Constrictor” the following year and supported it with a tour that included his infamous stage show. Cooper switched to Epic Records in 1989 and continued to put out albums, notably “Trash” which produced the hit single “Poison.” Throughout the 1990s and early 2000s Cooper’s star continued to shine as he released albums and toured. In 2003 Alice Cooper was honored with a star on the Hollywood Walk of Fame. The next year his radio program “Nights with Alice Cooper” became a nationwide hit and in 2005 the album “Dirty Diamonds,” was released. “Along Came a Spider” was released on July 29th 2008 and became Cooper’s 25th album. Alice Cooper could be called the godfather of “Shock Rock” and has been imitated by many newer bands. Where some may have fallen flat Cooper found a niche and has kept relevant by continuing to entertain audiences both young and old with his over the top concerts and persona. Currently Alice Cooper is on a world tour.