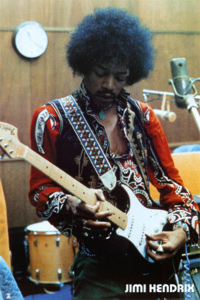 On November 27, 1942, Johnny Allen Hendrix was born in Seattle, Washington. The summer after his mother Lucille Jeter died, in 1958, his father James Hendrix, who changed his son’s name to James Marshall Hendrix after getting out of the army in 1946, gives Jimmy 5 dollars for a second hand acoustic guitar. These 5 dollars could very well have spawned one of the greatest rock guitarists to ever live. Jimmy spends countless hours strumming away and buys his first electric guitar in the summer of 1959, and joins the “Rocking Kings” playing his first gig at a National Guard Armory. After an honorable discharge from the Army due to an injury incurred as a paratrooper, Jimmy gets work playing guitar in the studio for artists like Sam Cooke, Ike and Tina Turner and Little Richard. 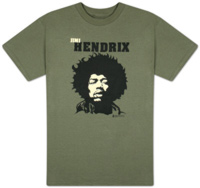 Playing with Little Richard eventually brings Jimmy to New York City where he meets Chas Chandler with whom Jimmy flies to London. Along the way the two decide that Jimmy will now be “Jimi.” After Jimi forms “The Jimi Hendrix Experience” in 1966 with bassist Noel Redding and drummer Mitch Mitchell, Chandler becomes the band’s manager. That same year The Jimi Hendrix Experience records their debut album “Are You Experienced” which includes songs such as “Purple Haze,” “Hey Joe” and “Are You Experienced?” which keeps the album placed highly on the British charts. 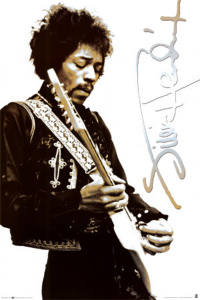 In 1967, after his performance at the Monterey International Pop Festival, Hendrix famously lights his guitar ablaze on stage. This makes the band instantly popular and after recording and releasing the album “Axis: Bold as Love” the band sets off on a major U.S. tour in 1968. Later that year Hendrix releases a version of “All Along the Watchtower” by Bob Dylan, which is, ironically, Hendrix’s only top 10 hit while he is still alive. In June of 1969 after the Denver Pop Festival the Jimi Hendrix Experience breaks up.

In August of 1969 Hendrix performs at Woodstock, which is held in upstate New York in the town of Bethel, with his new band “Gypsy Sun and Rainbows”. The band plays at 7:30 am, but Hendrix’s awe-inspiring rendition of “The Star Spangled Banner” becomes the most memorable moment of the festival, and to this day is probably the most popular non-traditional versions of the song. Hendrix, along with Billy Cox on bass and Buddy Miles on drums, go on to form “Band of Gypsys.” Eventually Mitch Mitchell takes over on drums. 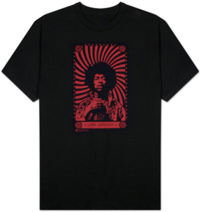 In 1970 Hendrix and his manager, Mike Jeffery, bought what was previously the “Generation Club” in New York City for $50,000 with the intentions of starting a club. After finding out that it was costing Hendrix $300,000 a year for studio time, Electric Lady Studios opened instead. It’s opening party on August 26th had attendees including Yoko Ono and members of Fleetwood Mac. After opening the studio Hendrix flew to England and performed at the Isle of Wright Festival on August 30th. Unfortunately on September 18th died in his sleep while staying at the Samarkand Hotel in London. He was only 27 years old.