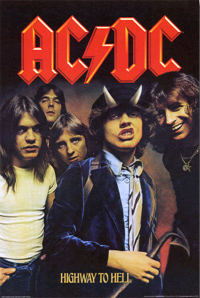 In 1963 the Young family left Glasgow, Scotland, to move to Sydney, Australia. Thanks to this move music fans around the world can now associate Australia with more than just Kangaroos, Koala Bears and Didgeridoos. They can associate the only country that is also a continent with one of the most straightforward hard rocking bands ever: the electrifying AC/DC. Since older brother George was already in a band, “The Easybeats,” it only made sense that younger brothers Malcom and Angus would try their hands at it, too. On December 31st 1973 AC/DC, at a club called “Chequers,” took the stage for the first time. At this point the band was made up of singer Dave Evans, lead guitarist Angus Young, rhythm guitarist Malcom Young, bassist Larry Van Kriedt and drummer Colin Burgess. The band signed with record label Albert Productions shortly after. Dave Evans’ role as lead singer was short-lived, and in September 1974 he was replaced by Ronald Belford Scott, more commonly known as Bon Scott, who was a friend of oldest Young brother, George. Since the band had only recorded one single with Evans, “Can I Sit Next to You Girl” they simply re-recorded the song with Scott. 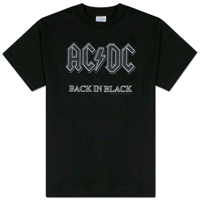 After recording the album “High Voltage” in 1975, Mark Evans took over the duties of playing bass, and Phil Rudd became the group’s drummer. Without the instability of changing members, AC/DC got to work with brother/producer George Young and released both “T.N.T” and “Dirty Deeds Done Dirt Cheap” in 1975. Having signed an international deal with Atlantic Records in 1976, “Let There Be Rock ” became the first album to be released around the world. At this point, Cliff Williams became the band’s new bassist. With the blessing of brother George, in 1979 John Robert Lange produced their next album, “Highway To Hell,” in London England, which took a grueling 6 months to record. The album ranked #17 on the US charts and the group set sail on its first European tour as headliners. Unfortunately, shortly after on February 19th 1980, singer Bon Scott died of asphyxiation caused by excessive alcohol consumption. 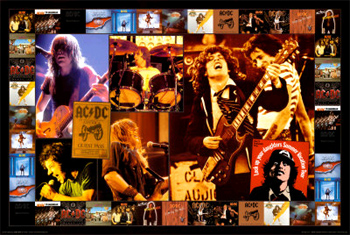 Continuing on after Scott’s death was hard, but with Brian Johnson stepping up to the plate as lead singer the band released what would become the 6th best selling rock album of all time, “Back in Black.” The album was reportedly a tribute to Scott, sporting an all black cover. The album included hits such as “Hell’s Bells,” “You Shook Me All Night Long,” and the absolute cornerstone of the album “Back in Black.” The album has since gone on to sell over 22 million copies in the United States alone and 41 million worldwide, a staggeringly impressive feat by any measure. In 1981, the band released “For Those About to Rock” which, in the US, sold one million copies in its first week and became the band’s first #1 album. It included the hits “Let’s Get it Up” and “For Those About to Rock.” The group finished up the 1980’s releasing “Flick of the Switch” in 1983, “Fly on the Wall” in 1985, “Who Made Who” in 1986 and “Blow Up Your Video” in 1988.

The band started off the 1990’s with a bang, releasing “The Razor’s Edge,” which included the hits “Are You Ready,” “Money Talks,” and “Thunderstruck” which was apparently a song based on an experience Angus had flying when his plane was struck by lightning. In 1992, they released a live album appropriately titled “Live,” and in 1995 released the Rick Rubin produced “Ballbreaker,” which included the songs “Hail Caesar,” “Cover You in Oil,” and the infectious “Hard as a Rock.” “Ballbreaker” also featured Phil Rudd back on drums. 5 years later, in the year 2000, the group released “Stiff Upper Lip” which continued the band’s tradition of Platinum selling records. 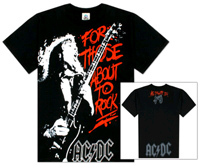 AC/DC seems to not beat around the bush when it comes to music. They play loud, powerful and memorable rock, and to quote singer Brian Johnson, “We just play music that’s fun and simple–the way our audience likes it.” He seems to know what he’s talking about, seeing as every studio album ever to be released in the United States has gone at least Platinum, with the likes of “Back in Black” going “Double Diamond Plus” (or 22x’s Platinum). With the recent release of their now Platinum album in October 2008 “Black Ice,” AC/DC doesn’t show signs of stopping their domination of the music world anytime soon. In fact, as of March 3rd 2009, their entire European Stadium Tour has sold out. It’s fairly safe to say the members of AC/DC have quite a bit of job security.